Samovar Making Back in the Old Days. Part II Fitting and Turning. 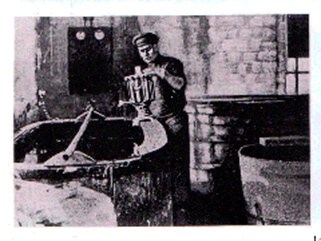 Solid raws and samples made from brass sheets looked poor and had pale colors, indistinct patterns and rough surface. Before being treated, they had to be shaped in the first place. Most of the raws underwent double shaping: lathe turning and stock removal, i.e. processing using fitter tools.

Before getting down to the adjustment itself, wallsides, lids and jugs got soaked into 5% sulfuric acid for two minutes, then cleaned in the water tank and finally left on the floor to dry. That actually was it, the whole ‘soaking process’ to remove rust and, at the same time, fatty substances and mud from the surface. Next, the wallsides of the samovar body, depending on its kind, were sent to the turning and fitting machine for further treatment. 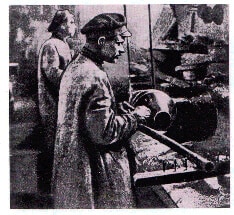 The turning shop had two departments: brass and casting works. The driving turning machine adjusting the raws, wallsides as well looked somewhat like a fast spinning roll with wooden mould shaped to treated raw securely fixed to it. Once the spinning roll was set to go, the raw already got securely fixed to the mould, so, the operator would press the tool against its surface to peel off the dark face layer.

Wallsides got treated following particular procedures giving their surface nearly mirror gloss. Faceted walls only got its inner and outer sides turned, while the bottom was smoothed and fitted. Fully smoothed wallsides only got turned all over the surface.

The lids had both their inner and outer sides turned, the former more careful, while the gorges just had neck and shoulder- work done.

Cast raws, necks, crowns and caps were turned at the same spinning lathes as the wallsides. After turning, crowns and necks were hand-pressed to get shaped holes.

Round coaster first got turned on lathe machines, except for fitted legs. Other shapes of coasters required fitting touch-up only.

The faucet only had external fitting, including the handle, to then get drilled out on turning lathes using special tools. The handle got fitted precisely to the faucet so that the faucet and handle made a raw pairs. Like this, as every single faucet had its own handle pair and vice versa – the handle only matched the faucet it was made for. Completed handle post-turning was named ‘key’. Handle grinding used to be quite exquisite and required special skills, and the craftsmen who did it got called ‘faucet operators’.

Th ring also went through double adjustment including turning and fitting: inner circle got turned to give it accurate outlines, while the raised patterns got fitted to make it look glossier and sharp-cut.

This shop was equipped with long working benches standing together with metalworking vise. Metal workers had two teams:cast raws works, and for wallsides works. 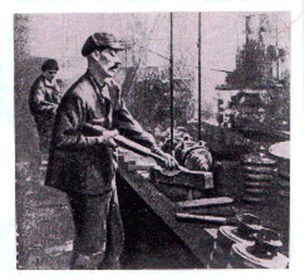 Adjustment of faceted wallsides went in several steps. First, metal worker peeled the wallside in the rough using steel cutting tool shaped like scrapper. Once the dark upper level layer peeled off, the surface looked uneven and unattractive. To smooth it down and work on the surface hidden from scrapper rasps, they used rasps of various shapes and cuts. After rasping, followed the sequence of glass-paper, pumice and powdered charcoal treatment. The work was deemed completed once the surface finish looked mirror-like.

The above treatment of wallsides involved several stages for tinning ( walls from the inner side), cut-ins and to solder the ring. So to complete the treatment after soaking, wallsides were sent to turning shop to have their inner faces turned and then tinned. Tinned wallsides then were sent for another round of treatment: faceted ones first went to the fitting shop, and after together with the smooth ones, returned to the turning shop to have circles holes cut in. Faceted wallsides had to be turned in rough and tinned in advance. Circle punching process involved lathe operator precisely cutting the cast of the wallside to a thin, but rather high ledge on the lower side of the circle. Cut wallsides and rings went to the presser, who, once fixed on the shaft of the press machine, set it to go and bent the circle edge to peak on the cast of the wallside, trying to squeeze them stronger and press to the bottom of the circle. After bending, the wallsides with embedded circles entered the forge, where circles got soldered to the walls. Then again, back to turning: smooth ones on the entire surface area, and faceted ones at casts and bottoms of their wallsides. This is where the circle turning came to its end.

Now all the parts of the future samovar were ready for assembly: wallside, handles, legs and faucets. Next came the samovar assembly.