You are here:
ABOUT SAMOVARS 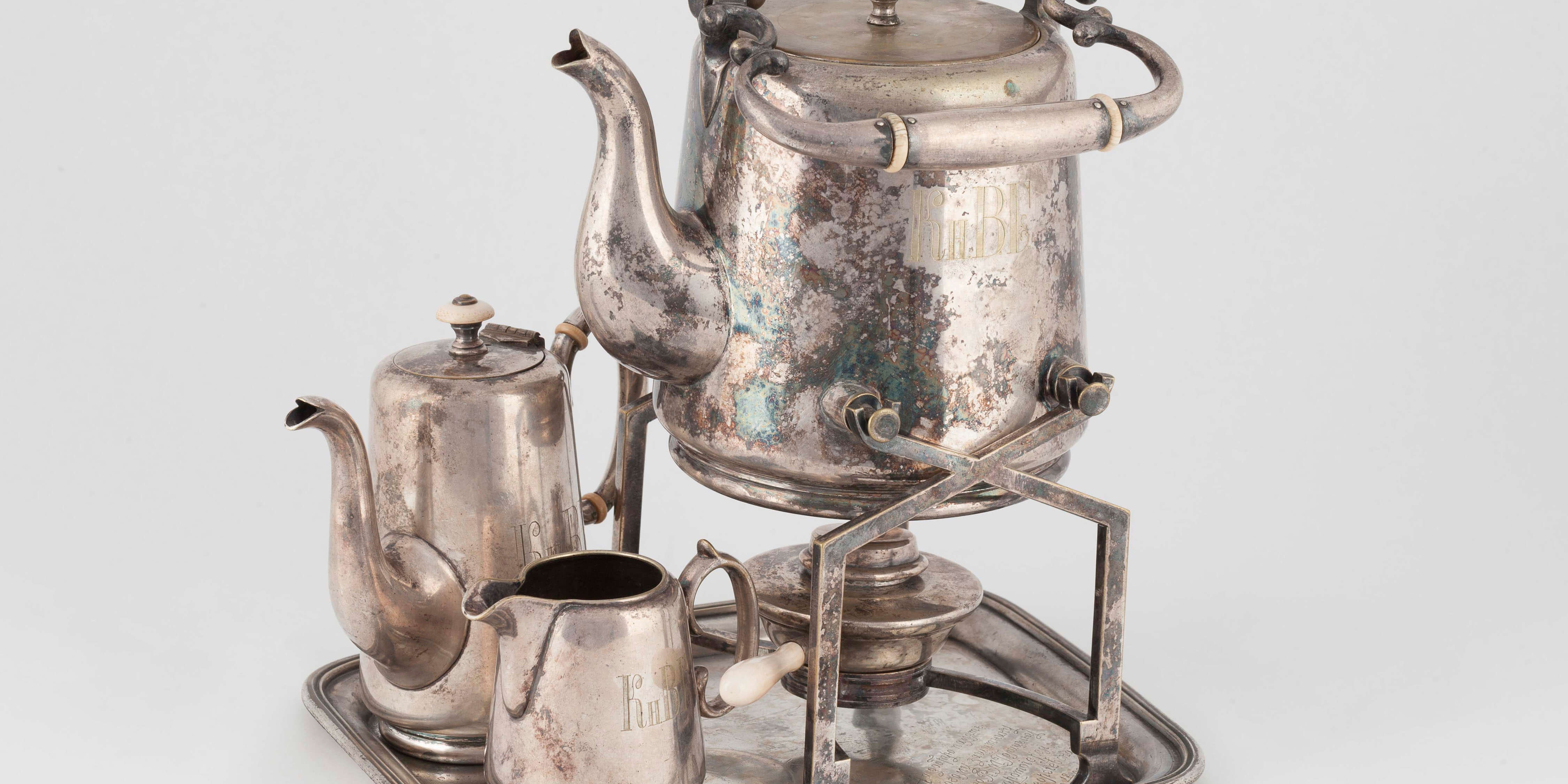 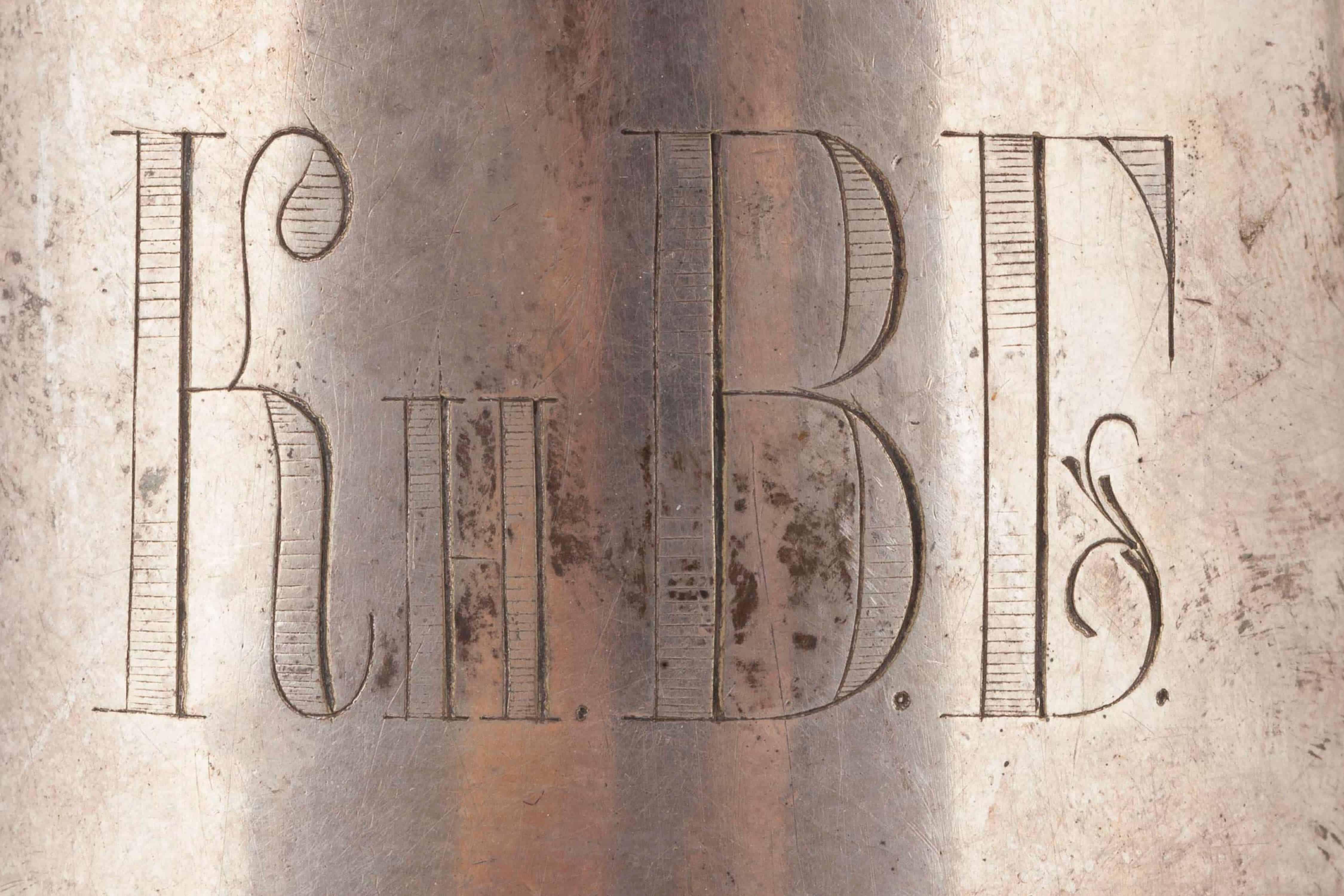 A new fascinating showpiece came to exhibit in the Museum of samovars and bouliottes: it is a bouliotte with a tea set comprising a tray and milk and coffee jugs by ‘Norblin & K’, Warsaw silver maker’s Works, dated early XX century. The set is quite moderate and non-extravagant, simple and practical. It is not the design of pieces that draws attention but the engraved dedicatory inscription on the tray and the code of their former owner, Prince Vladimir Golitsyn, an interesting person to whom this story is dedicated. 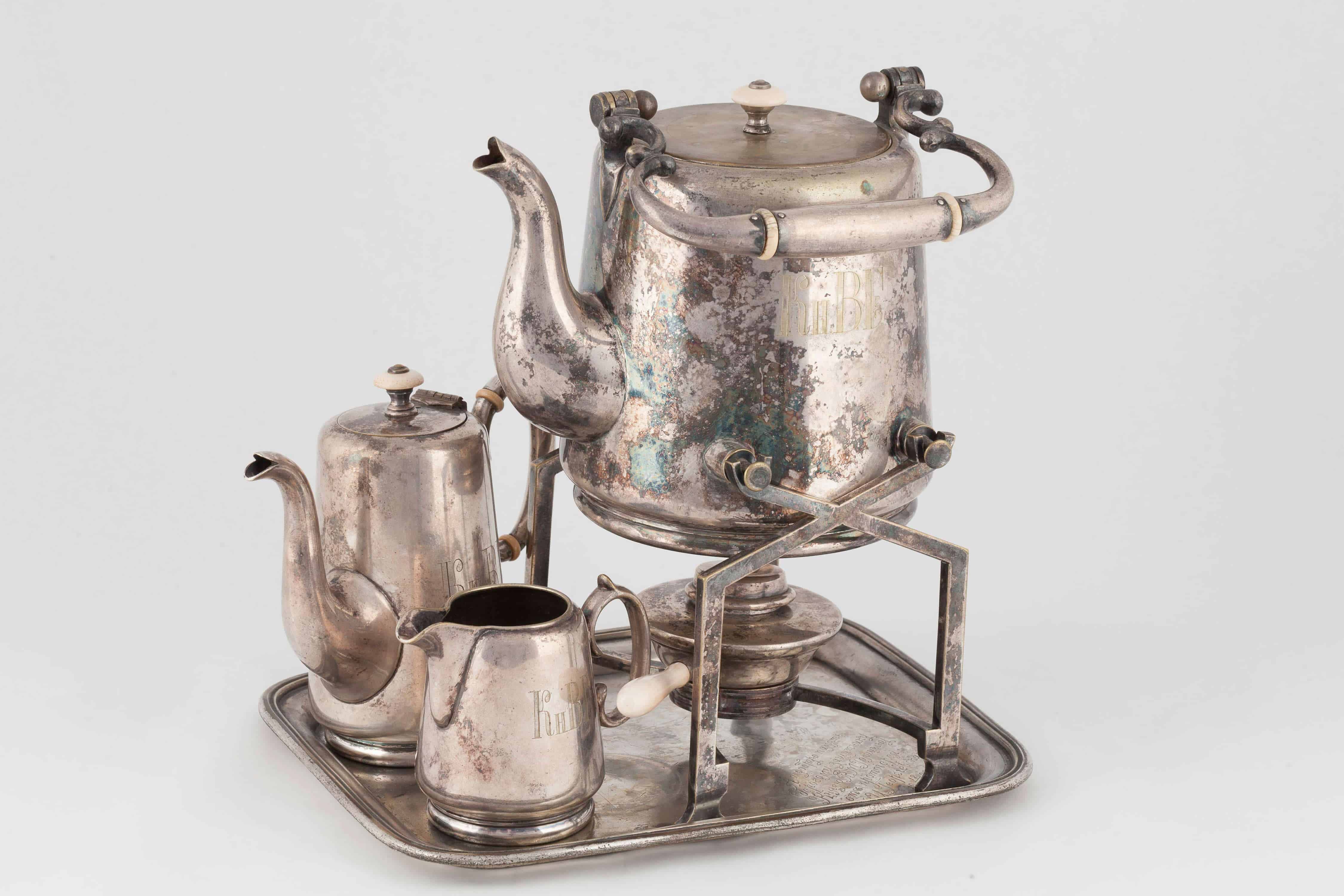 Vladimir Golitsyn, of noble Golitsyns family, was born in Paris. His grandfather, Fedor Nikolaevich, served as a curator at Moscow University while his father, Mikhail Fedorovich, a colonel of the Guards and an aide-decamp, who settled near Moscow later in his life, was the marshal of nobility of Zvenigorodskiy Uyezd (country). The Golitsyns have always served faithfully and loyally to Russia: field marshals and generals, senators, privy councilors, governors and mayors, professors and academicians, engineers, teachers and artists among them. 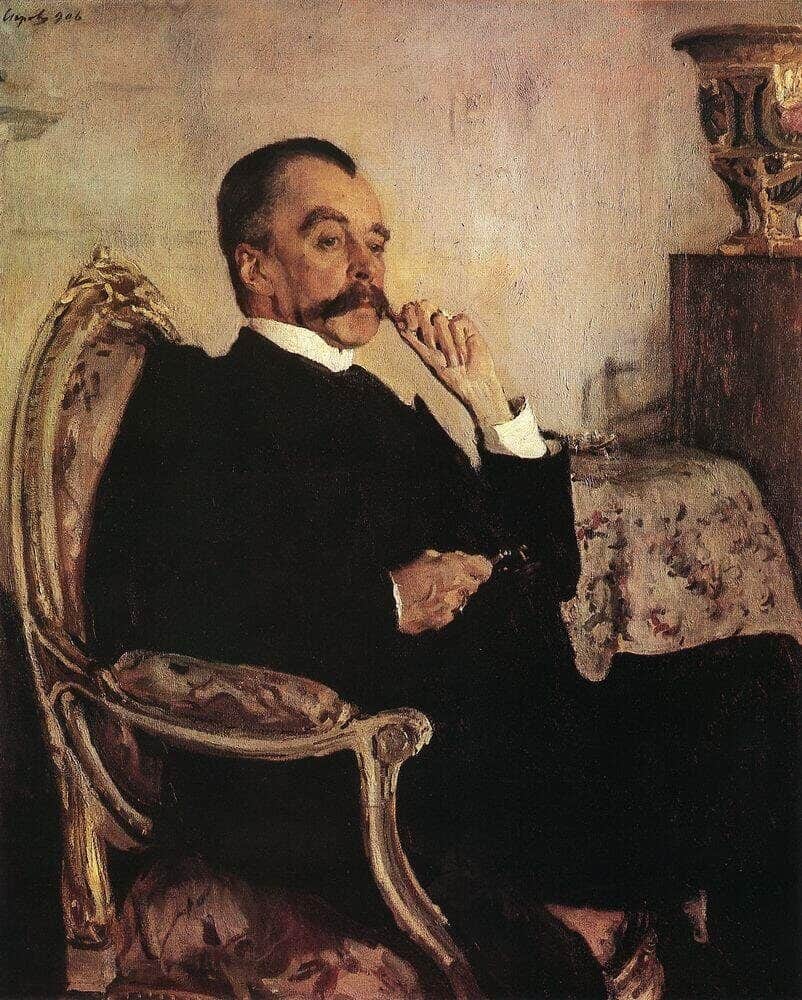 Nikolay I. Astrov, thinking about V.M. Golitsyn, mentioned: ‘He was simple, sweet and polite to everyone. His noble, refined, and beautiful appearance pleased Muscovites. Especially ladies were charmed by prince Golitsyn, calling him Our prince Vladimir Mikhailovich, our gorgeous sunshine.’

Vladimir Mikhailovich was not just a remarkable person but a high-ranking civil servant and intellectual. After graduating from Moscow University, he started out as an ordinary clerk in Moscow executive City Duma but become a vice-governor (1883-1887) and a governor of Moscow governorate (1887-1891) in less than twenty years. However, in 1891 due to his difficult relations with the new General-governor, the Great Prince Sergey Alexandrovich, the junior brother of Alexander III, Vladimir Golitsyn asked for resignation. One would think that a carrier of a 44-year old civil servant would have been over but it successfully resumed 6 years after. In 1897 via secret ballot, the prince was elected to be the mayor of Moscow with 101 votes against 4 NAYs, after his main competitor, famous and successful Savva Morozov refused to run in the very last moment. 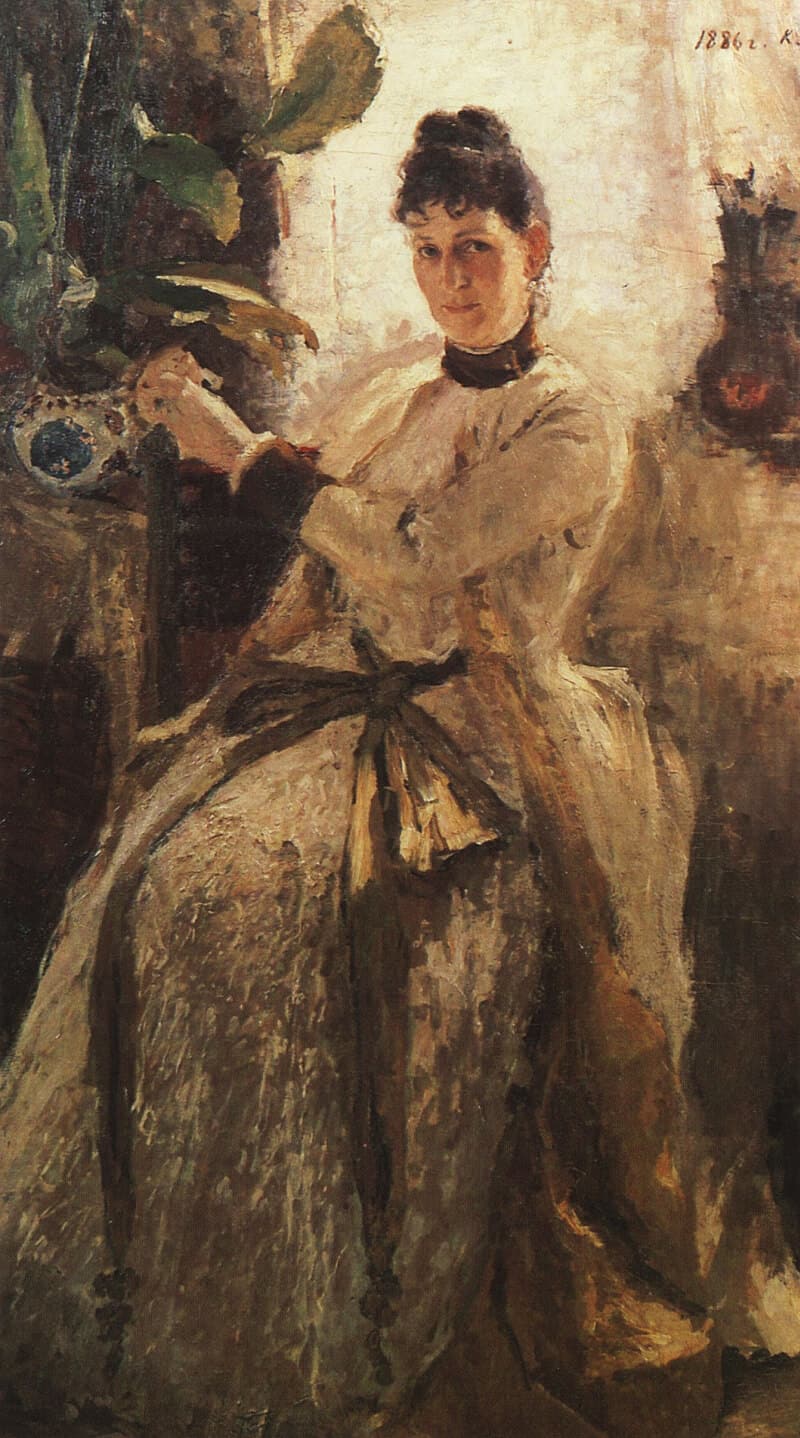 Being Moscow mayor and chairperson of Moscow executive City Duma, the Prince became famous for his revolutionary renovation of urban infrastructure. Among many useful deeds, he initiated the foundation of schools for women and men up to 600 students, Shelter for indigents, Eye hospital, Sanctuary for incurables and City children’s hospital. Under his guidance the city went through multiple positive changes: horse-driven railways were nationalized and upgraded to electric motors, initiated the construction of tram railroad, the first line of Moscow water pipe was completed and many others.

He has been elected Moscow mayor thrice but resigned during the Revolution of 1905 to be soon awarded as the honor freeman of Moscow.

After his resignation, Prince Golitsyn continued his charity activities by establishing Foundations for disabled soldiers of the Japanese War and donating great amounts saved up from Moscow mayor salary to the construction of orphanage.

The Prince had a very active social life as well being the chairperson in the Public Council of the Alfons L. Shanyavsky University, chairing the Managing Committee of the Polytechnic Museum and replaced Pavel M. Tretyakov as a curator of the Tretyakov Gallery after his decease. 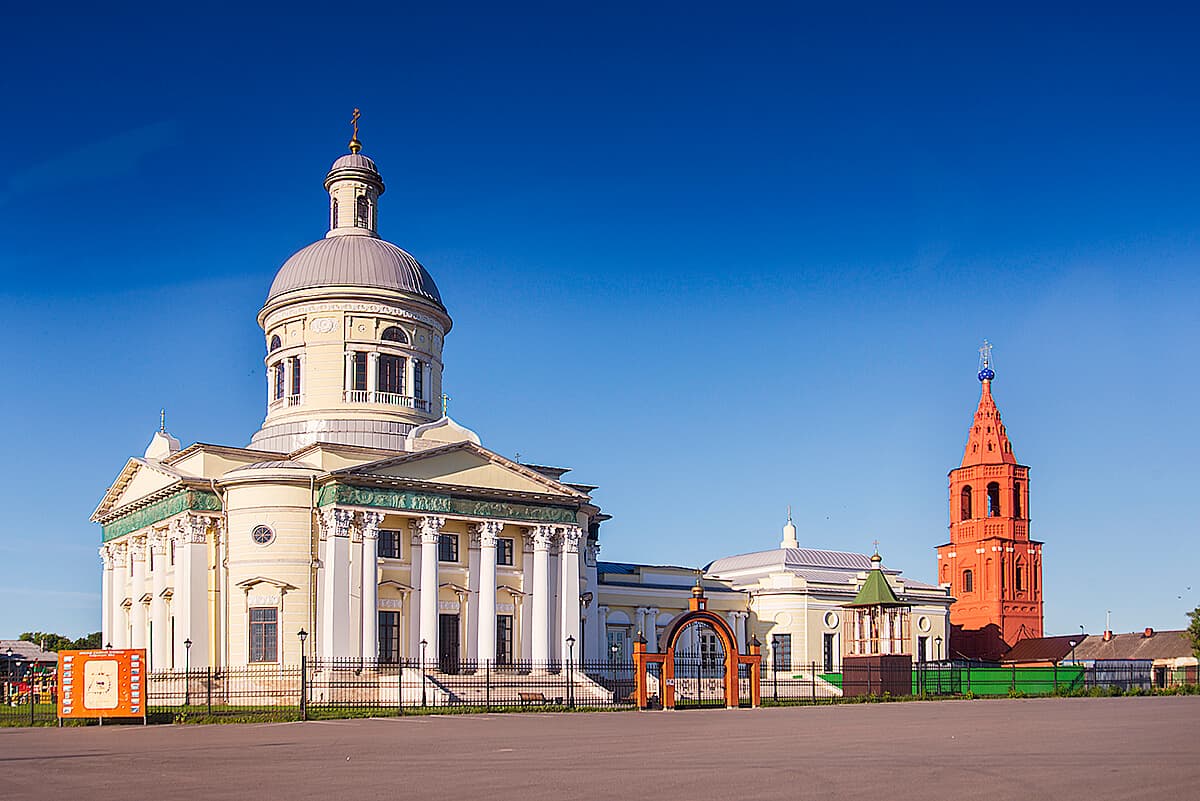 One of the Golitsyns’ estates in Buchalki village of Yepifan Uyezd, the place where his son Mikhail grounded, was Golitsyn Senior’s favourity. Vladimir Mikhailovich was fond of botany so he ended up writing his own book called ‘The Flora of Yepifan Uyezd of Tula Governorate’. Mikhail Golitsyn, his son, dealt with administrative affaires of Yepifan zemstvo with the great enthusiasm and made all necessary arrangements for construction of schools, hospitals and bridges and many other things. Together with his wife, he founded Orphanage and Handicrafts workshop for embroidered towels to employ countrywomen and a consumer association. Three winters in a row the Golitsyns organized ‘reading seminars’ for local teachers. 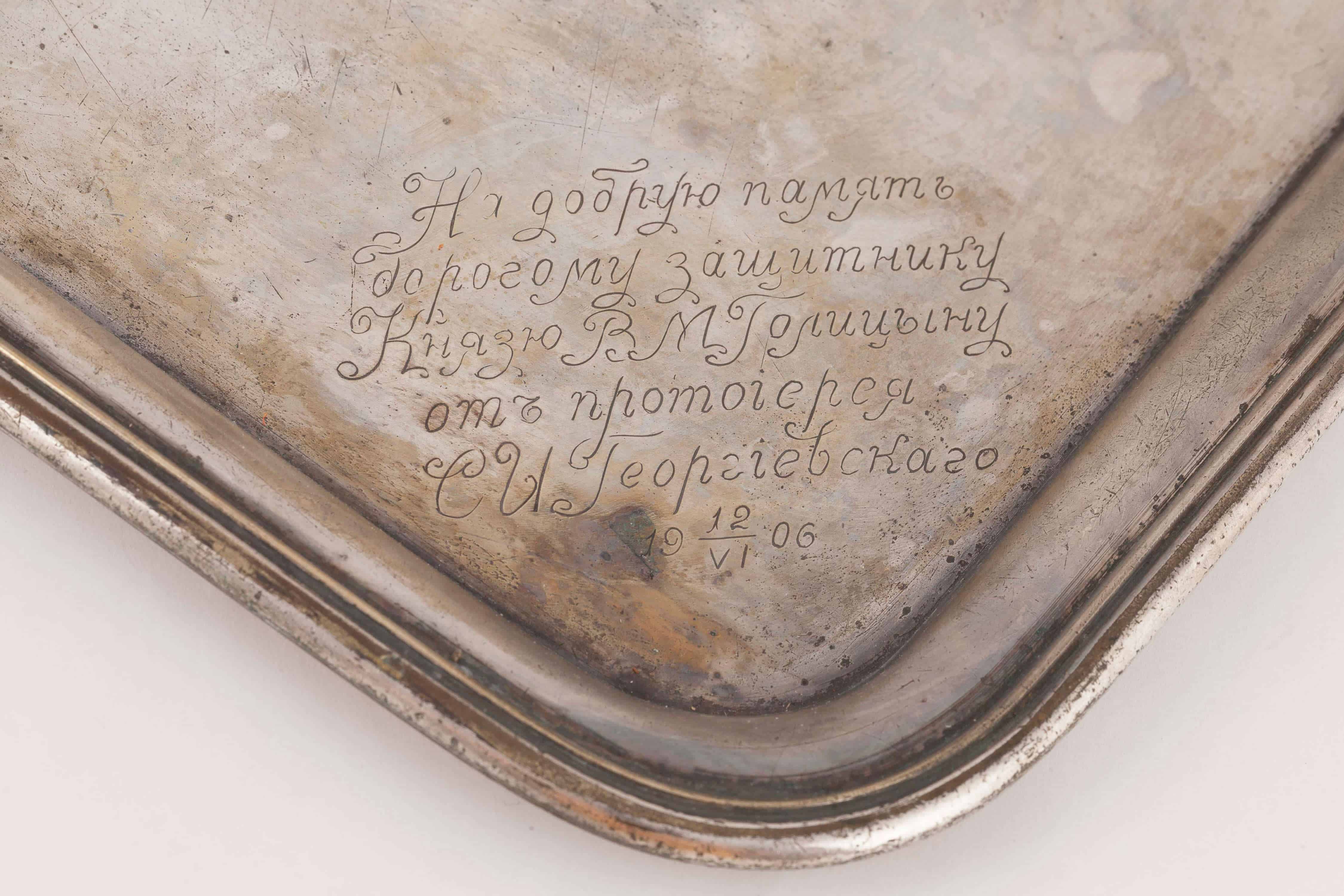 In 1906, amidst the height of peasant disturbance, the Golitsyns, the father and the son, took the lead in confiscation of landlords’ estates in Tula governorate. In June 12, 1906 Prince Golitsyn sent a telegram to the Tula governor saying that ‘due to the expanding peasant disturbance’ he decided to ‘discuss the situation tomorrow’ at ‘the assembly with landowners, priests, heads and officials’. Prince Golitsyn and his followers relied mostly on their partisans in the State Duma so the assembly was nothing but demonstration of their support and signal to solve this serious agricultural issue. Nevertheless, that assembly turned out to be the unique event where for the first time in history more than 10 landowners declared their willingness to share their estate, not to mention the intent to expand the land lease and lower its price.

That particular date of June 12, landmark assembly day, is engraved on the tray. Government reaction was quiet negative and no wonder: the assembly took a heavy toll on Stolypin’s reformative policy based on keeping landowner system intact while transforming the community and supporting the migration. Thereafter Stolypin himself immediately charged Tula governor to ‘inform Prince Golitsyn that his actions were considered, for sure, undesirable’.

The tea set most likely given at the sign of support from the most liberal Yepifan country population including Protoiereus Semen I. Georgiyevskiy, the abbot in Yepifan St. Nicholas Cathedral. 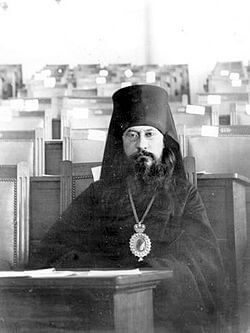 Nicholas Cathedral, a majestic and wonderful monument of classicism, could compete with the capital cathedrals in beauty and to date remains the main centerpiece of Yepifan village. It was built within 1810- 1850s to be admired at unseen splendor for the country town. From 1903 to 1907 Semen I. Georgievskiy, the one who called Vladimir Golitsyn ‘a defender’, served in it, while his son, famous metropolitan Evlogiy (Vasiliy Semenovich Georgievskiy (1868-1946)) was a member of the 2nd State Duma and, the archbishop Holmskiy, Volinskiy and Zhytomirskiy who after emigration took the lead in Russian orthodox parishes of Moscow Patriarchate in the Western Europe.

Simple at a first glance, the bouliotte keeps many interesting facts related to personal life of the Golitsyns and Russian History of XX century.