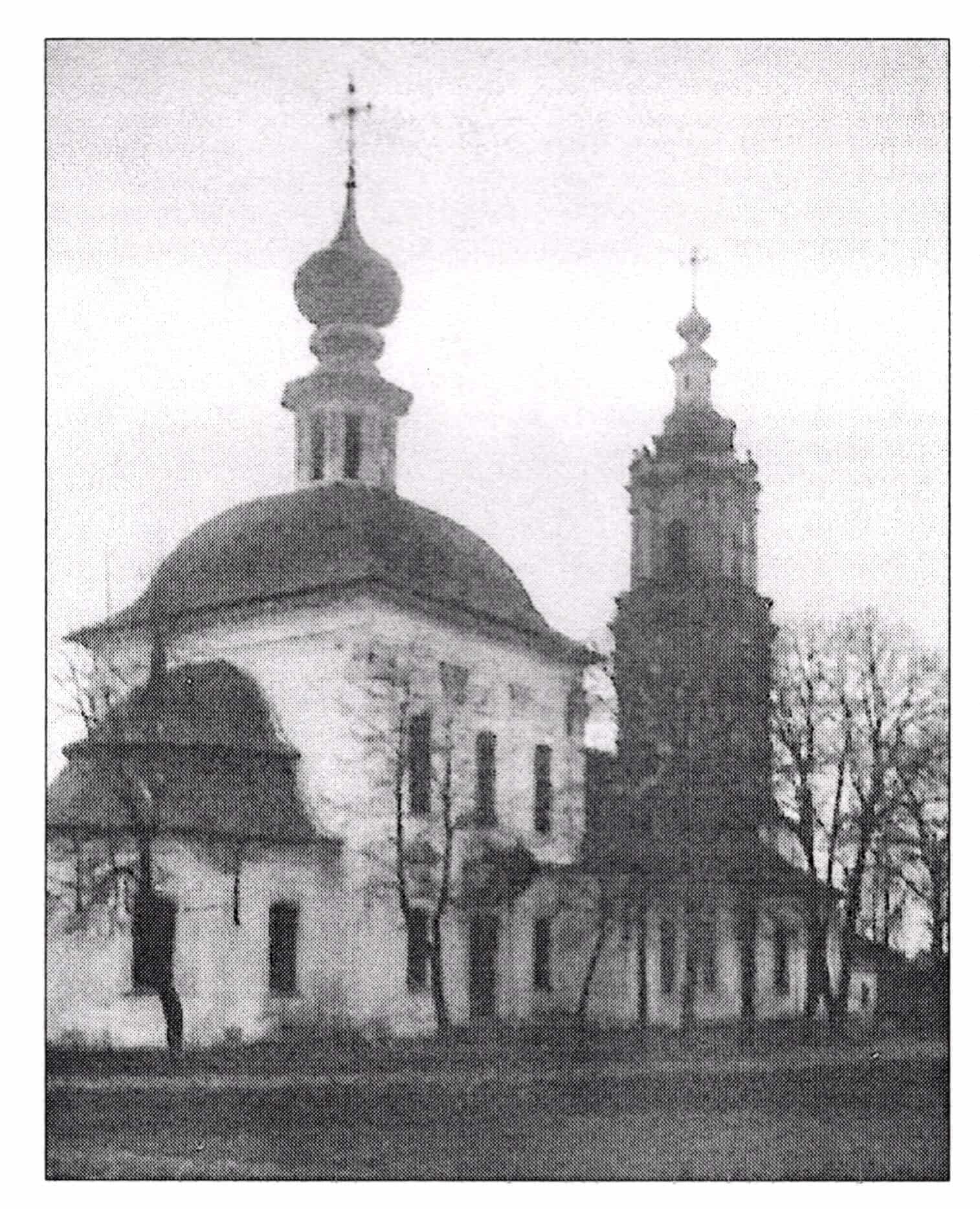 Many Tula samovar makers wore the same family name, so no wonder many of them got confused and quite frequently due to not just the same family name but first names as well. All the above especially applies to the Batashev brothers with many close relatives, namesakes and even those simply benefiting from the famous family name they borrowed while hiding their true origins (for instance, as Andrei Chikinov and Peter Ilyin).

The second most famous samovar maker family name is the Salishchevs. Comparing to over 20 true Batashev samovar makers (and many more counting the fake ones) at a time, there were 9 samovar makers named Salishchev. This article touches upon them.

By the XVII century plenty of Salishchev weaponmakers lived in Kuznetsk and Kirpich’ sloboda (districts) of Tula, and some of them went into samovar making later in XIX century,. According to the tenth enumeration records of 1857, the perish of St. Georges’ church on the Khopyor river, there were weaponmaker brothers Yakov (48 y.o.), Semen (42 y.o.), Konstantin (40 y.o.) and Dmitriy (37 y.o.), sons of Timofey. 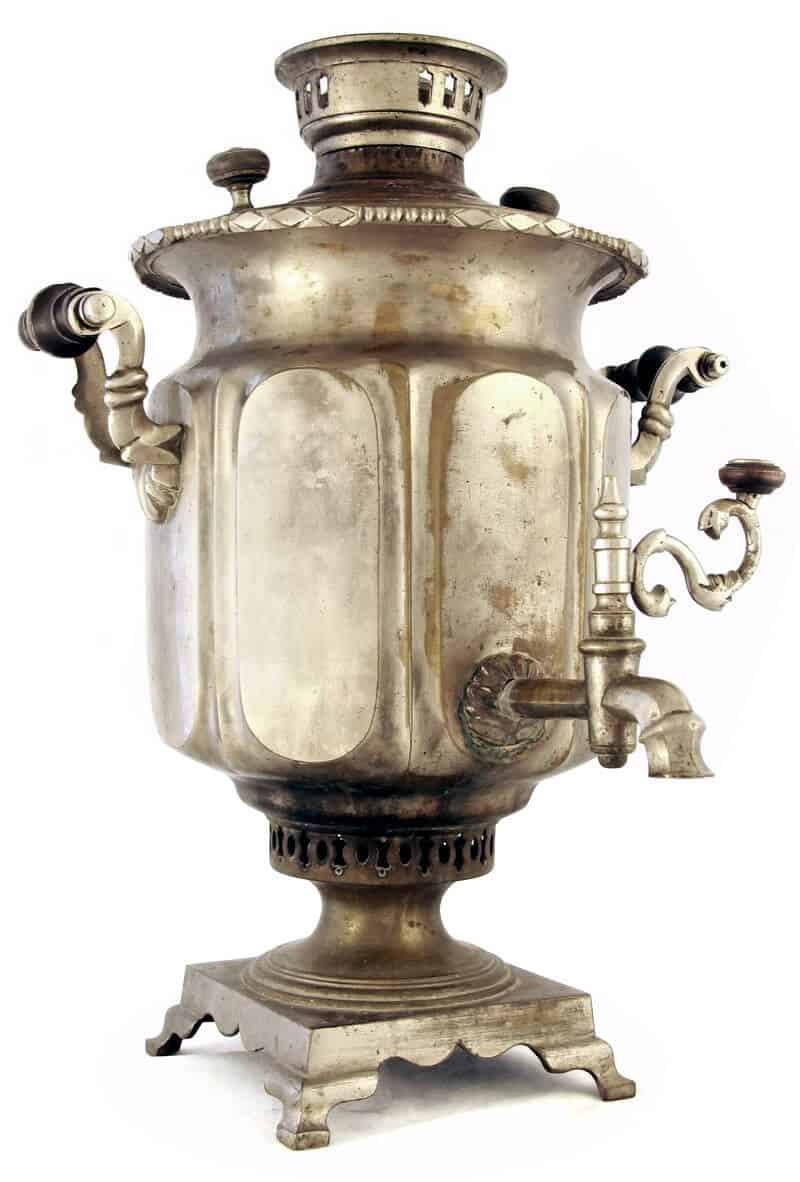 Samovar-jar by the Works of V.D. Salishchev

Semen and Dmitriy were directly engaged in samovar making: back in 1856 Dmitriy Timofeevich, back then still a bourgeois, opened his samovar works in Demidovskaya street (he dated the kick-start of his works in the operations journal). The works were housed in wooden buildings and produced over 1200 units per year in 1872 up to 6 000 units in 1886. After 1864 Dmitriy Timofeevich was enlisted in the second guild of merchants, by that time being already married to Tatyana Ivanovna (33 y.o.) with son Vasiliy (14) and daughters Mariya (6) and Anna (1). With no more sons born an two more daughters, Taisiya and Elizaveta, after Dmitriy’s death in1874, the works first passed to his wife Tatyana and then to his son Vasiliy.

Led by the latter, the works of V.D. Salishchev listed among Tula samovar works in ‘Samovars’ section of the Industrial and Commercial Directory ‘The Entire Russia’, existed up to the early XX century. By that time their output totaled to 30 thousand rubles in various items. As Vasiliy only had daughters, Vera, Zinaida and Mariya, and no sons, in 1901 the works had to be closed due to the owner’s death and no male successor left.

Trade mark of the Works of A.P. Salishchev

Semen Timofeev also came from the samovar making descends: the same directory, ‘The Entire Russia’, mentioned the samovar works of Alexei Pavlovich Salishchev, his grandson, in Liteynaya street, this time not as accurate though. The works were actually located in Hospital’naya street closer to the crossing with Liteynya street.

In early XX century the works was listed as the 5th grade manufacture (15 to 50 employees with the income of 3-40 thousand rubles). But in 1908 Alexei Pavlovich embarked on house building: instead of five single-storey wooden buildings he built one 2-storey stone building for the shop. The works had lost their former outputs during the construction and became the 6th grade manufacture (income up to 2 thousand rubles) with the 2-storey stone family residence on the same land lot. 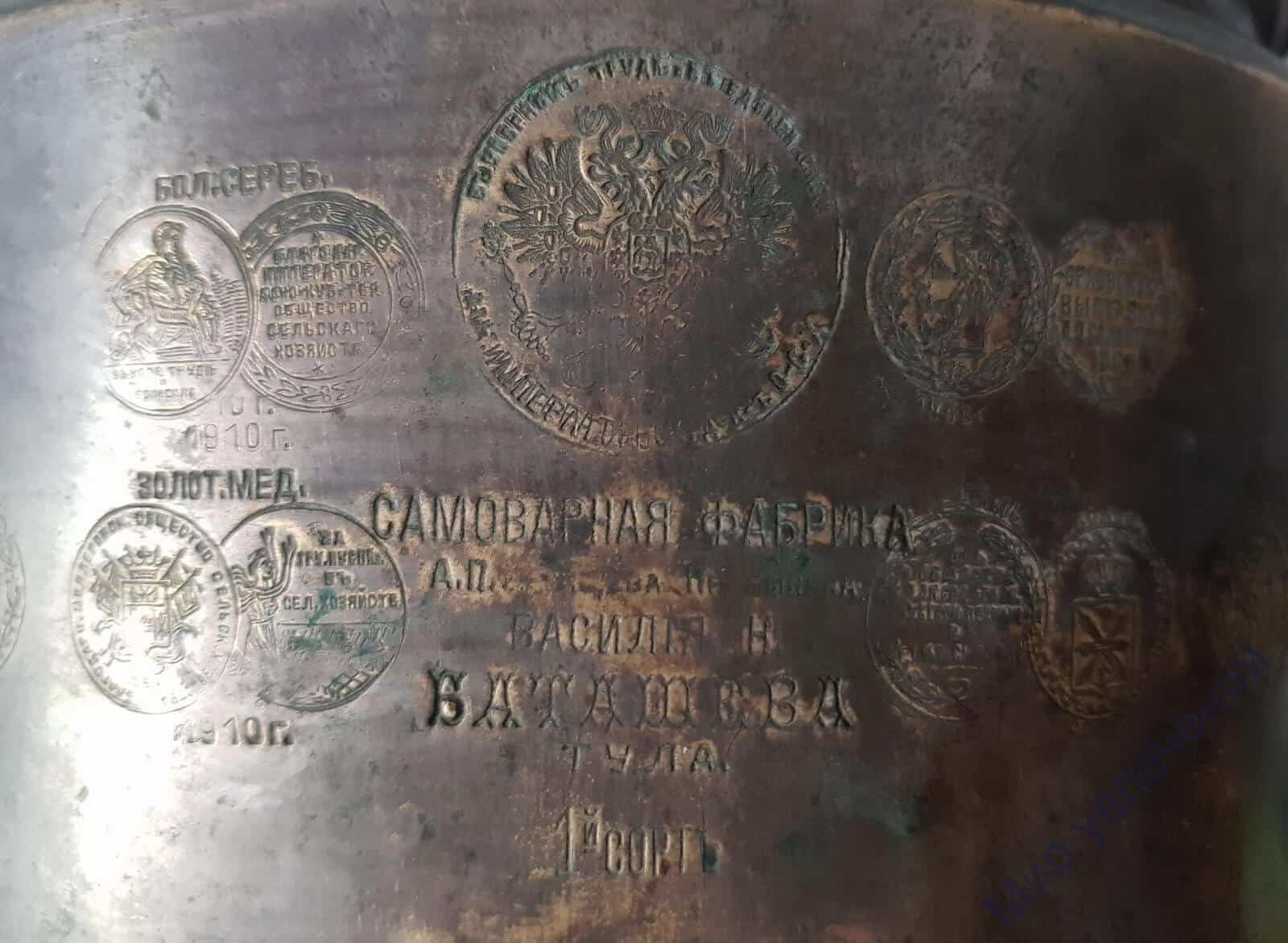 Fake Great Emblem on the samovar by A.P. Salishchev Works

Alexei Pavlovich had never got lucky in his family life: married thrice, he had children only in the second marriage. First time he married a woman, three years his senior, to apparently benefit from her wealth, and they never had children. In 1900 his first wife Ekaterina Ivanovna passed away and Alexei married young Valentina Ivanovna, 17 years of age. His sons Alexei and Vladimir were born one by one in 1905 and 1906, but his young wife died soon afterwards. Alexei remarried once again, to his third wife, Alexandra Alekseevna, 13 years younger.
The Works of Alexei Pavlovich Salishchev run until 1911.

Alexei Pavlovich may also be mentioned amongst those small manufacturers not above ‘relatively legally’ using the name Batashev and proclaimed himself to be their successor. He used the image of the Great Emblem, sign of honor for any manufacturer, as well, however the authentic Great Emblem was not framed or signed (except for the year of the awarding), while all of its replicas were circled in somewhat of a stamp of any Russian medal reverse.

Makes by the works of V.D. Salishchev and A.P. Salishchev and other Salishchevs were mass-market and targeted customers deprived of both fine artistic tastes and financial opportunities. There were typical ‘jars’, ‘shot glasses’, ‘bowls’ and simple ‘vases’.