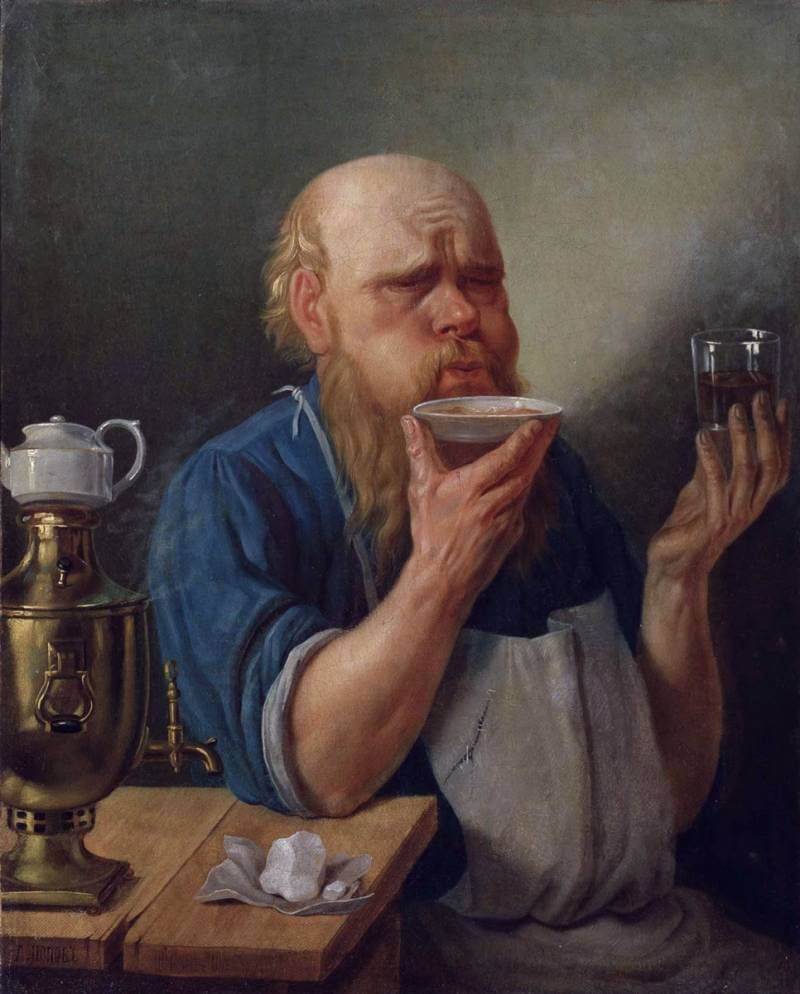 Domestic genre set on his feet among Russian visual art styles quite late, second half of XIX century, when Realism aspiring to study and depicture private and public life of people replaced both Romantic and Classic movements.

Samovar and tea –drinking have always been the most favorite topics for Russian Genre artists of XIX century as the one providing an opportunity to reveal the very details of the everyday people’s life. Real-life stories ‘around the samovar’ got depictured by many famous Russian painters as Konstantin Yegorovich Makovsky and his brother, Maximov V.M., Nevrev N.V., Korzukhin A.I., Polenov V.D. and many others including genre artist from Tula, Popov Andrei Andreyevich, whose name remained unfairly forgotten. 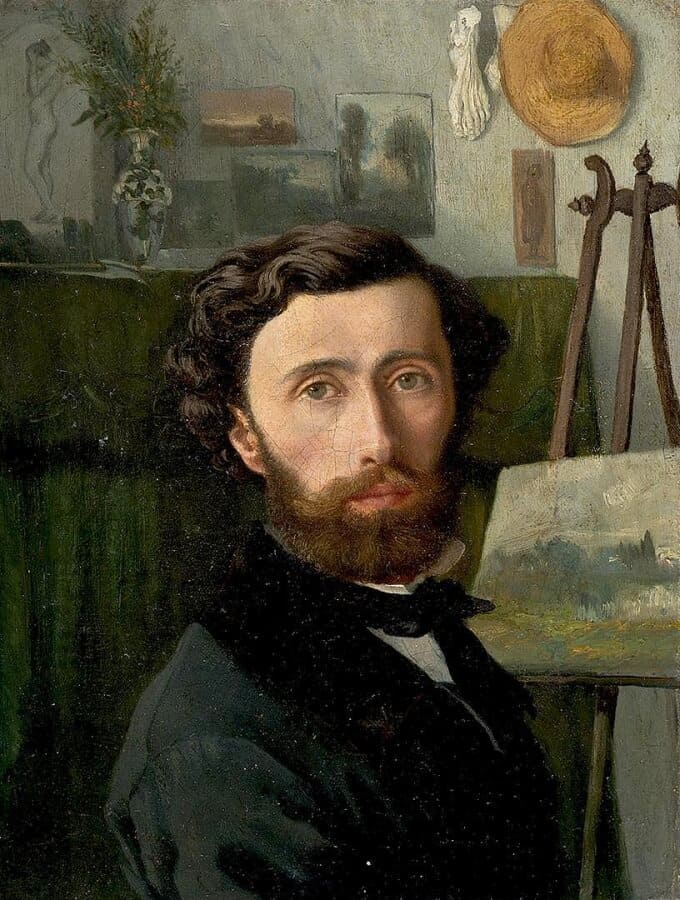 Andrei Popov coming from Tula raznochinsy (self-employed plebeians) family in Tula and was born the late XIX century. His father, Tula bourgeois and peasant artist, taught his sons, Andrei(1832-1896) and Vassiliy (1838- later 1902),arts real early, and the older son, Andrei, seemed to show a brighter talent. In 1846, after graduation from Tula high-school, Andrei enrolled to the Russian Academy of Arts in Saint-Petersburg as a non-degree student where he began studying landscape arts at Mikhail Vorobyov’s class. From 1855 Andrei Popov studied at the battle painting studio of Bogdan Willewalde. Back during his studies he already was awarded with several student medals (5 silvers, 3 golds including one big medal), and the Academy paid for his four-week trip to Europe. 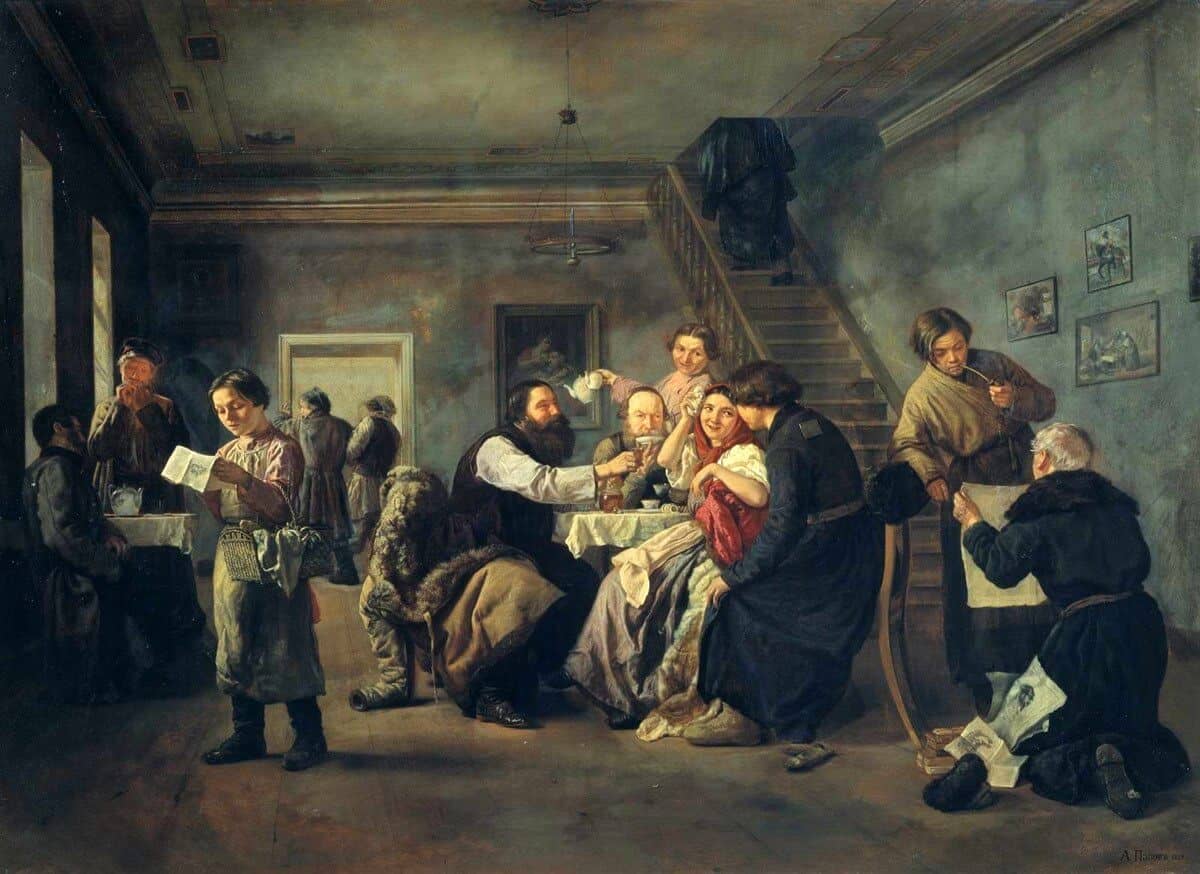 From the very beginning of his adult carrier, Andrei Popov showed great promise as an artist with his vivid and captivating manner. Depicturing images, the painter won over both artists and experts in fine arts, both professionals and amateurs. He took part in academic exhibitions where he presented his works to the wider audience. 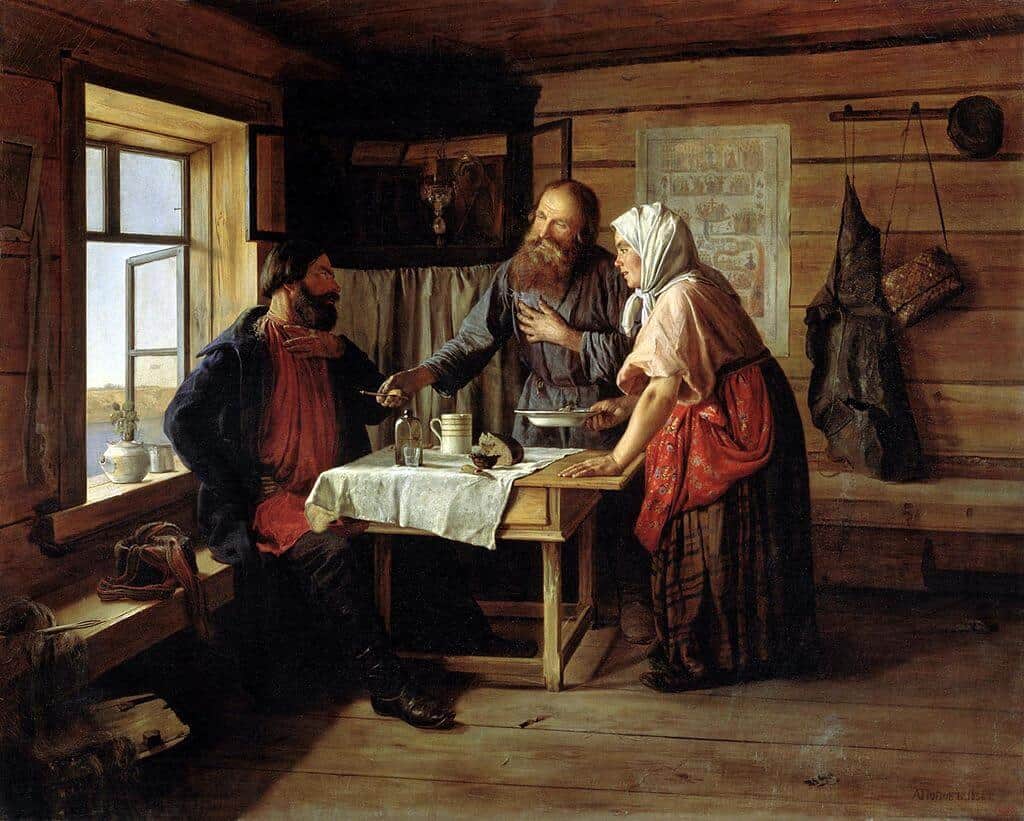 Andrei Popov had been supported by the Imperial Society for the Encouragement of the Arts (since 1849 he had received a pension from the Society). His works got rewarded: Birchwood in 1852 and Traditional Folk Performance at the Fair in the Village Staraya Ladoga in 1853, – with small silver medals. Then, in 1854 his School teacher and Peasant family in the field won big silver medals. Demyan’s fish soup in 1856, based on Ivan Krylov’s fable, granted the artist a small golden medal. This work, with its expressivity and wise humor, greatly impressed the audience of academic exhibition in 1857. The following year, in 1858, he was honored with the title of the Great Artist for his Merry letter and together with P.P.Ikov was appointed as the assist the drawing teacher at the class of academician I.N. Vistelius where he worked for a long time. 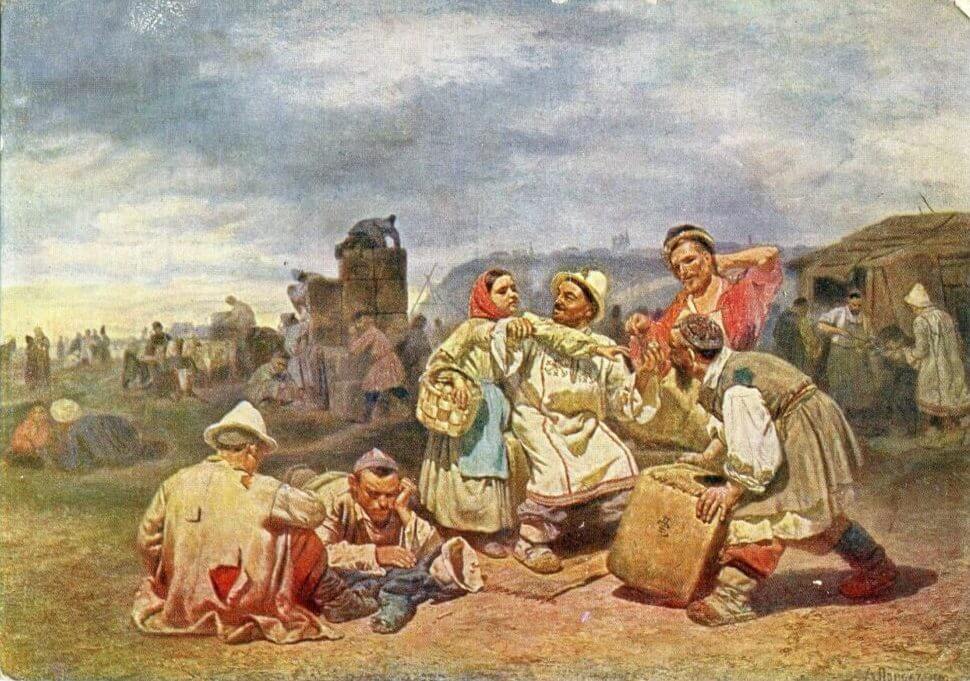 Twice in his life Andrei Popov got down to drawing Guesthouse and Saint-Petersburg Eatery covered with the projects competing for a big golden medal. In 1859 he went to Nizhniy Novgorod to get some inspiration for his The Tatars Loading Tea in Nizhny Novgorod (Tea warehouse at Nizhny Novgorod Fair) which brought him the big golden medal and title of the Great Artist of first order along with the right to go abroad in paid-for journey. In 1863-1867, as a holder of pension of the Imperial Academy of Arts he visited Berlin, Dresden, Leipzig , Cologne, Frankfurt, Munich, Dusseldorf, Brussels and Antwerp, lived in Paris, worked in the outskirts of Fontainbleau and Barbizon. He established close friendship with V.G.Perov, V.G.Shvartz and A.A. Ritzonni living in Paris at a time. He spent last year of his pension trip in Rome and left it for Russia in 1867. 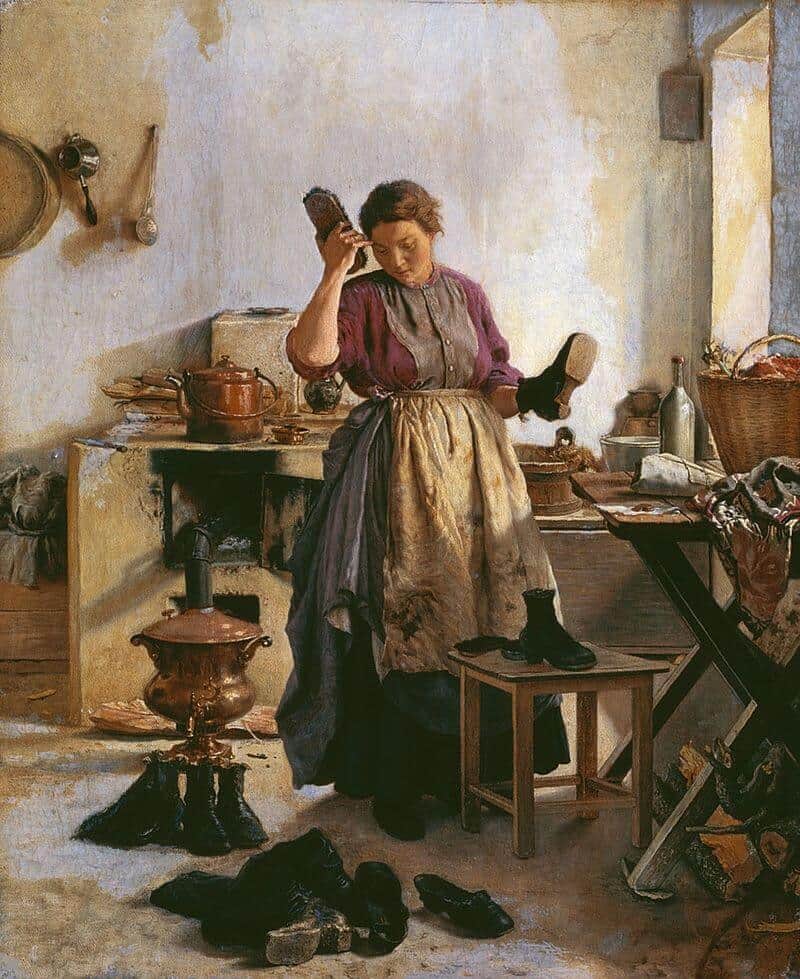 Since 1870’s he had lived in Kaluga, Tula and Nizhniy Novgorod working mainly as a genre artist; drawing landscapes and making travel sketches. In the late 1850’s-1860’s he made some pictural and graphic portraits (of M.A.Yazykov, M.S. Shchepkin, I.F. Gorbunov and P.V.Annenckiy), and participated in ‘Friday painting evenings’ by the Society for the Encouragement of the Arts.

Since the very childhood Andrei Andreyevich has always been in poor health and with years it only got worse, to the extent that after 1873 he had to leave off his work. He spent 1873-1874 in Yalta, together with his brother.

Unfortunately, Andrei Andreyevich Popov did not leave much of his artistic legacy behind. With his extraordinary look at things, domestic routine and life in general he could have created many more masterpieces but due to the extremely unfavorable fate his most ambitious plans were doomed. The artist passed away on June 24, 1896 (or 1897), at the age of 64 in his home town Tula, and was buried in the same.

A.A. Popov’s works are now exhibited in many museum collections including State Tretyakov Gallery, State Russian Museum, Tula Museum of Arts. Some of artist’s letters are now stored in the State Archives of Tula region. 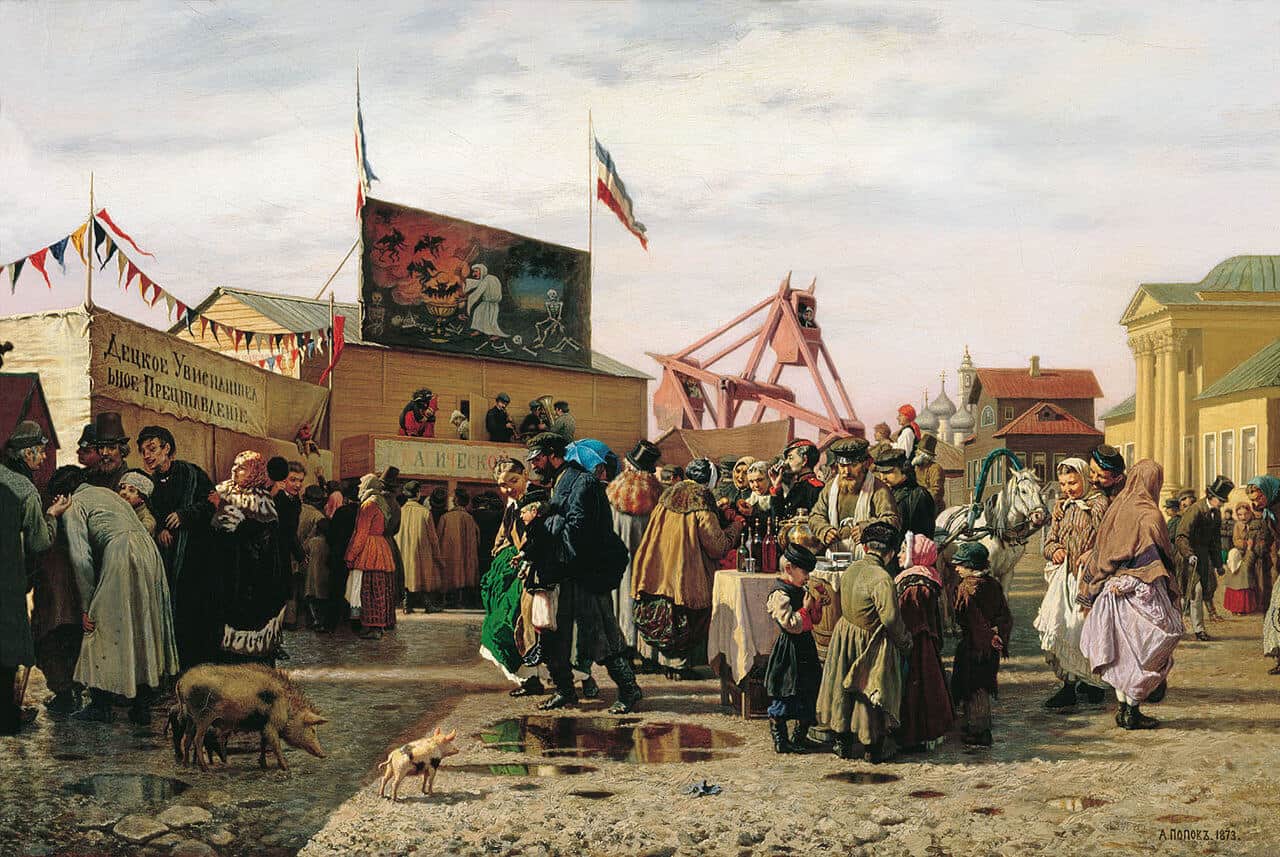 A. A. Popov. Buffoonery in Tula on Holy week. 1873, State Russian Museum

Crêpe Week or Maslenitsa is regarded as one of the merriest and tastiest holidays in Russia.
29/02/2020
COLLECTION
NEW EXHIBITS
Collection
SEARCH
MUSEUM NEWS
Read all museum news
Go to Top
Посетители: 99105 | Просмотры страниц: 292798