In the folk calendar we can find a number of holidays associated with Christianity, but which actually have ancient pagan roots. Their significance and rites are now largely forgotten. An exhibition of folk dolls by master of crafts Irina Agaeva at the Museum of Samovars and Kettles in Park Hotel “Grumant” will help us recall some of them. 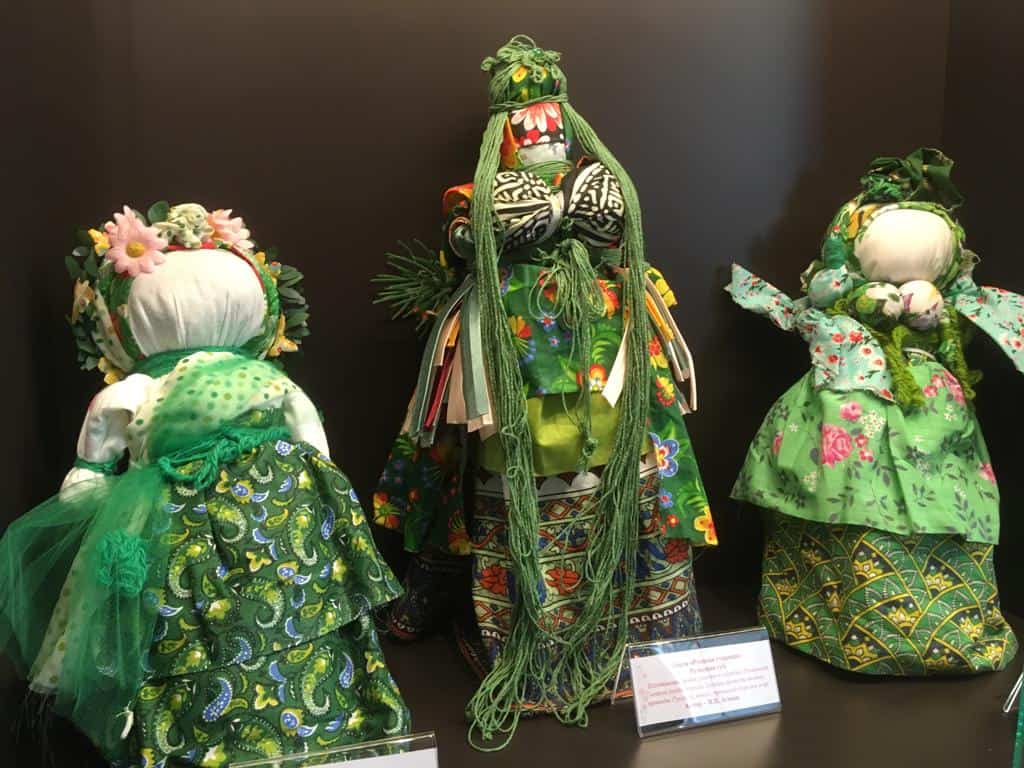 Dolls «Mermaids» of the Tula and Kaluga provinces. The author is the national master of the Russian Federation Irina Agaeva

For example, Green Svyatki or Mermaid week. This is a whole complex of ceremonies aimed primarily at the commemoration of ancestors and celebrating fertility of the earth. In the framework of the folk calendar, Mermaid Week coincides with Trinity. It sometimes falls on the week preceding the holiday, and coincides with the so-called Semitsky or Trinity weeks (in Kaluga, Orel and Tula provinces), or it can begin after Trinity Sunday – starting with the Spirit’s day and ending with All Saints Day.

The Mermaid week was filled with rituals, customs, and prohibitions, which were associated with the belief in the temporary appearance of mermaids and the desire of the peasants to avoid their harmful influence.

There was a widespread ban on heavy (field) work; the peasants avoided going into the forest and fields alone, taking horses and cattle into the forest, bathing in lakes and rivers, especially at noon and midnight. Women believed that during the Mermaid week you can not rinse your clothes, whiten your canvases, do work related to spinning, weaving, sewing.

Honoring the holiday of mermaids and compliance with certain rituals guaranteed the help of mermaids. In addition, to ensure the favour of the mermaids, they were cajoled. Decorative shirts were hung up on trees in forests and on bushes growing near rivers, and shawls and pieces of clothes were thrown in the forests at the sight of naked women and children. And if any cattle went missing during the Mermaid week, the Smolensk peasants offered mermaids, who were supposedly to blame for the loss, “gifts” – bast shoes were left in the woods, onuchi from the young women’s shirt, bread and salt, wrapped in a clean rag; all the while repeating:

I beg you, mermaids,
Accept my gifts,
But return my cattle

According to popular beliefs, those who ignored the traditions and rules, would experience adverse influence of the mermaids.

In some places the days of the Mermaid Week had specific names; with different actions, rites, and prohibitions. So, Tuesday in the Tula province bore the name of “Zadushnie polinki” (commemoration of people who did not die of natural causes), Thursday – Semik, Saturday – Klechal day, Semitsky nights called “sparrow’s nights”. Tula peasants believed that the “stranded” dead roam in the Mermaid (Semitskaya) week in cemeteries, not able to cross over. To reassure them, you need to come to their graves and make pay respect to them in form of offerings. Then the dead, satisfied with the treats, do not come out of the graves. Forgotten dead people often engage in quarrels and fights with mermaids, and mermaids take revenge for all insults on the living.

In the Kursk province, Wendsday was called burolomi”: there was a strict ban on canvas whitening, it was assumed that if the ban was not observed, a wind would take away the drying canvases and carry them to the whirlpool. The last day of the week was called Mermaid Sunday . In many places on this day there was a celebration in honor of the mermaids, with whom they parted until next year – Mermaid day or mermaid’s farewell 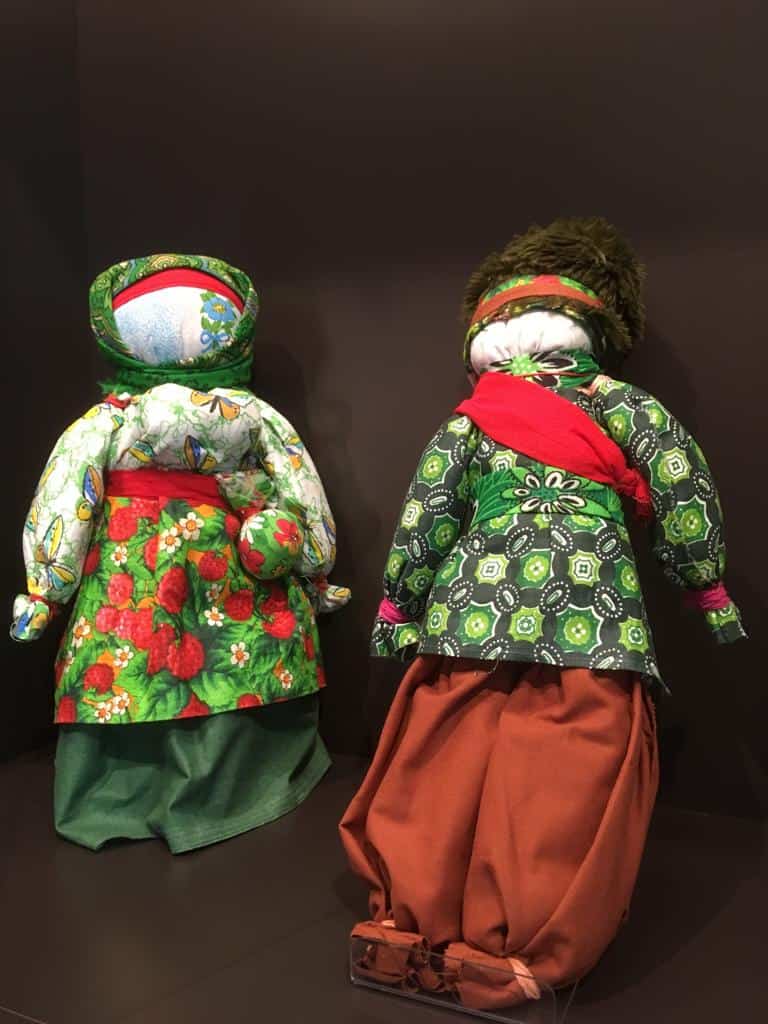 Dolls «Semik and Semichikha» of the Tula province. The author is the national master of the Russian Federation Irina Agaeva

The main character of the rituals was the mermaid, who was usually portrayed by mummers. The role of mermaids was played by girls, young women and young men, and sometimes by a couple : a girl and a boy, a woman and a man, an old woman and an old man. Decoration of the mummers indicated that the mermaid belonged to the world of “undead”; performers of the role of mermaids covered their faces – put on masks, blackened them with soot, girls and women pulled their hair over their eyes. A characteristic feature of the mummers was wearing white, loose clothes or cross-dressing for both men and women. Their clothes were usually old torn shirts, pants and sundresses. Sometimes girls and young women represented the mythological type of mermaid: young and beatiful. The attractive appearance was created by decorating the actors with greenery and flowers.

The ritual exile of the mermaids took place in the evening, often at midnight. Traditionally, they were pushed to the rye field, to the village – to the outskirts, to the forest, to the river – to places that were understood by the people as bordering between the worlds of the dead and the living.

The central action of the “mermaid’s farewell” ceremony was a procession with a mummer, a group of mummers or a doll. In Ryazan province there was a call of women and girls: “Come, sisters, lets cook kulesh” – a sign for the gathering of participants on the street. The gathered people, along with the mermaid, then walked along the settlement, less often in a meadow or near a field. In a number of places the procession was running: some of the participants would be running away, others would be trying to catch them. The mermaid usually would head the procession, or she was surrounded by the other participants.

Dressed mermaids during the procession tried to scare, tickle, hit with a whip or make fun of the persons accompanying them. The fright of the participants was often due to the surprise effect. In the Ryazan province the mermaid, upon reaching the field, would turn sharply and rush at the crowd accompanying her. She would then run up to someone, tickle them, all the while other participants were trying to stop her; she would then suddenly choose another victim and attack them. In the Oryol province two mermaids would sneak up on youth from two sides. Young people would shout: “Ay, mermaids are coming!” and scatter, and mermaids would try to catch girls and boys and tickled them to tears. The whole population of the village would actively participate in the festivities. According to Tula custom, the peasants ran through the fields, each of them waved a broom, driving away an imaginary mermaid, while shouting loudly: “Catch up, catch up!”

The actions of the participants included traditional methods of driving away evil forces: the participants played loud musical instruments – harmonics, balalaikas, pipes, rattles, made noise by hitting gates, household tools, basins, snapped whips, shot rifles with blanks near the exits of the village.

The exiled mermaids for some time hid in a dwelling, in neighboring villages or in the forest, then took off their costumes leaving them right there, returned back, trying not to be seen by the people. The mummers took off their canopy mask, and the people would throw it into the river, or, tear the doll into pieces and scatter them around; the clay masks of the participants were also broken. Before the destruction, the mermaid was often undressed, taking towels and ribbon from candles home.

Often, the farewell was preceded and accompanied by general festivities, during which people danced, arranged games, shared meals and sang songs.

In many places, it was customary to pour water over each other. In the Tula province there was a ritual of obligatory ablution in the river at dawn after the rite. Tulans associate this custom primarily with the fact that the ban on swimming due to the departure of mermaids has now been lifted.

In the Ryazan district, the participants in the rite had to jump over the bonfire on which the mermaid burned. It was believed that everyone who jumped was protected from diseases, evil spirits and sorcerers.

After all the mermaids were expelled – and some peasants claimed that they had seen them running crying and screaming from the villages to the forest – all those present would proclaim: “Now we have banished the mermaid, we can safely walk everywhere!” And the festivities would continue.

In the popular mind, the ceremony was driven by the desire to get rid of such a dangerous creature as a mermaid, who were instilling fear in people. Thus, the farewell of the mermaids can be considered as banishment, removal from the realm of the living, of mermaids in which the people would see the souls of the dead. Another reason to return the mermaids to the land of the dead was to protect the crops and on the life of the community as a whole. 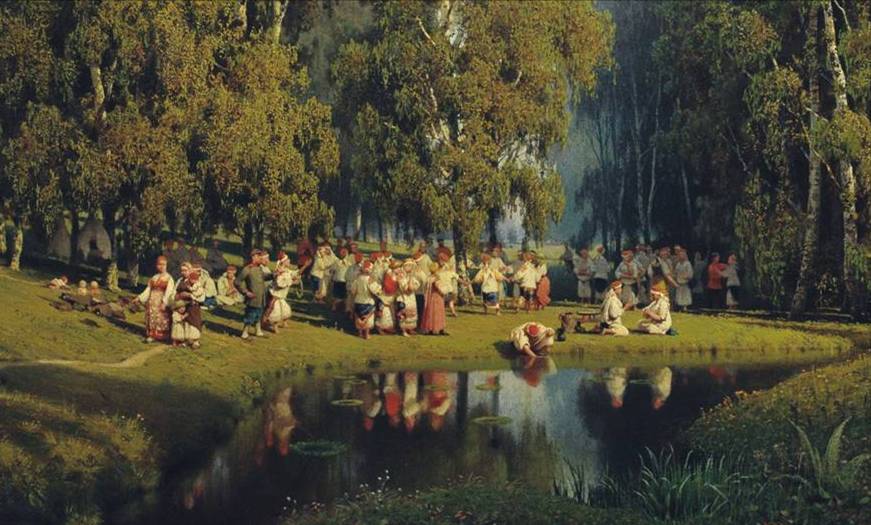 The author of the article is senior researcher at the “Tula’s Samovars” Museum L.V. Britenkova.