The Small House of Nashchokin 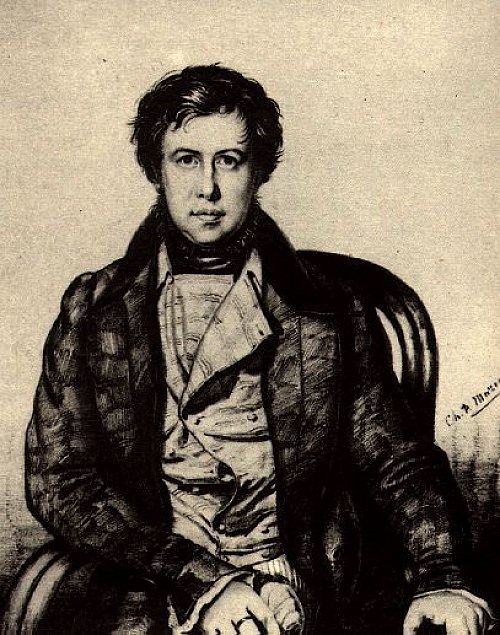 Pavel Voinovich Nashchokin, a faithful and true friend of the great Russia poet Alexander Pushkin, had an odd fish reputation, and rightly, so to speak so. However his contemporaries unanimously described him as the man of extraordinary charm, intellegence and kindness. He was always held in respect by everyone despite his lifestyle being somewhat different from common. Pavel Voinovich was a passionate collector for various pieces of art. The most famous piece of his collection was a model of 1820-1830’s noble’s apartment, sort of a “doll house” with every single tiny piece made by well-known living craftsmen. Mr. Nashchokin came up with the idea to recreate his own apartment after a conversation with Mr. Pushkin whom he met in childhood when they both attended the school of Tsarskoye Selo.

Their friendship though began long after, when Alexander Pushkin returned to Moscow from his exile in Mikhailovskoye, and lasted up to the poet’s death in 1837. Pavel Voinovich was passionate about entertaining both guests and himself. Contemporaries recalled on his avocation to buy bagatelles of all kinds like used to vases, chandeliers, or even a candle stab used by a very famous actress of Imperator Alexandrinsky Theatre, Varvara Asenkova, and all for tremendous amounts of money. Keeping them for a while he could easily offer it to one of his acquaintances.

Mr. Nashchokin recreated his personal “Small house” in a very realistic way, with all rooms common for a noble-dwelling of early 19 century from a living room to a pantry. There are 611 pieces of interior remained, and they are all original makes, not dummies: 4.4 cm -pistols are able to shoot, clocks are set, there is even some scum seen inside of the silver samovar with bone handle, and the piano is not a toy: you can play it like Mr. Nashchokin’s wife did pushing the keys with knitting needles. 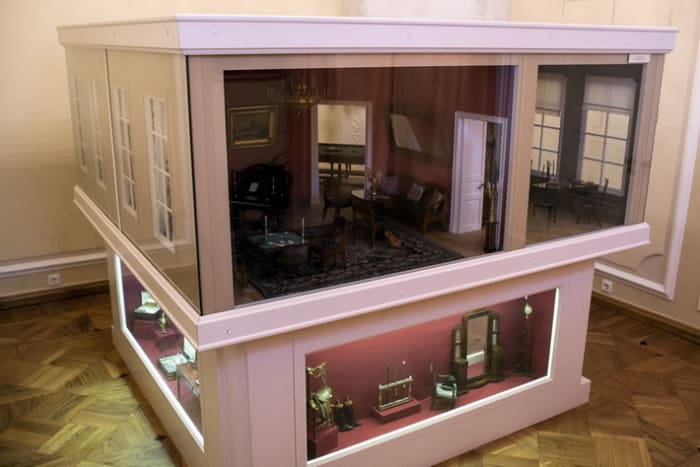 The Small House of Nashchokin. Russian Museum of A.S. Pushkin

Pushkin followed the recreation of the small house with great interest and gave Mr. Nashchokin advices on decoration and furnishing. In his letter to Natalya Pushkina(Goncharova) of December 8, 1831 he wrote: “His house(remember it?) is being decorated; what chandeliers, what a tea set! He ordered a piano for a spider to play and a bowl of Spanish fly size.”

Pavel Voinovich spent a great amount of money to make his dream come true – 40 thousand rubles would be enough to build a real house. He has never been cheap out with craftsmen, so multiple pieces in the small house were made by well-known makers, for example, like furniture by the works of Gombs’ brothers, or china set by the factory of Popov in Moscow region.

The creation of the “Small house” began in 1820’s when Mr. Nashchokin lived in St.Petersburg. Initially the small house was described as “a long rectangle framed with bohemian mirror glasses with two levels…The upper level accommodated a ball room with the table set for sixty in the middle… The ground floor had dwellings and everything necessary for any grand-duke’s mansion of sorts.”, wrote Vasily Tolbin, a contemporary.

The entire high society of Saint Petersburg came to see the small house, and the host’s close friend Alexander Pushkin was one of the first. In his letters to his wife, the poet admired his friend’s eccentric toy: “Nashchokin’s House is brought to perfection, with only two little living people missing” – and proceeded to describe a comic dinner where “ they served a little mouse under sour-cream and horseradish blanked instead of a little pig. I wish there were guests…”

In 1830, Pushkin wrote the poem “Housewarming”, no doubt addressed to Nashchokin.

While spending immense amounts on his entertainment, Mr. Nashchokin spent his entire life in rental apartments and always getting by. Being tight on money and gambling debts had him end up having to pawn the small house in late 1830’s. Mr. Nashchokin has never managed to buy it out so the wonderful house spent more than fifty years among gombeen-men. 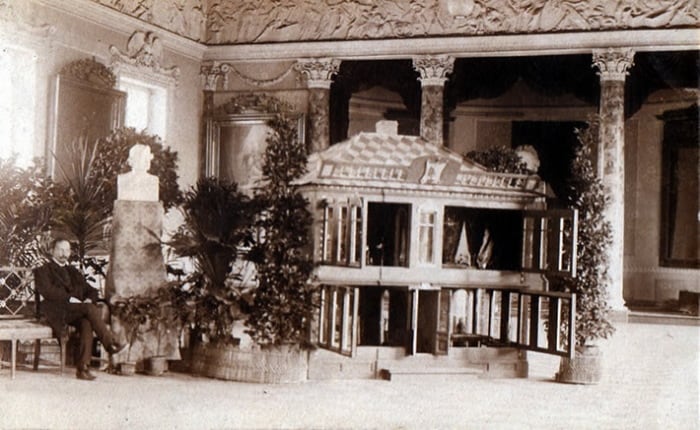 S.A. Golyashkin in 1910 at the exhibition at the Academy of Sciences

Only at the beginning of 20th century, thanks to Sergey Galyashkin, a collector and artist, the small house was set free and came to well-earned glory and incontestable value of being something that “remembered Pushkin”.

In 1910 thanks to Mr. Galyashkin the Academy of Science arranged an exhibition, and later the small house found its place in the exposition of Museum of History. From 1917 to 1937 the house was kept in the Museum of History and afterwards ended up staying in the Museum of Pushkin in Moscow untill the beginning of the war. Nowadays its home is the National Pushkin Museum in Saint Petersburg.

The gift shop in the Museum of Samovars and bouliottes has one little thing that could have been of use for Nashchokin’s house interior: a set of tiny samovars, 5 cm high at most. These mini-samovars are the fine copies of the Museum exhibits, for example, a Yurta mini samovar comes from the life-sized original samovar by N. Vorontsov, 19 cebtury Tula samovar manufacturer, or a mini-replica of the Barrel samovar. Thanks to thorough attention to details, these mini samovars fully replicate their life-size prototypes. The entire set mini-samovars would have fit on the a 38 cm dinning-table of the Nashchokin’s small house. This set of mini-replicas now resides in its own small house –a wood coffret with custom place for each replica. As Pushkin wrote, there are only “little people” missing.