Samovar Making Back in the Days. Patterning 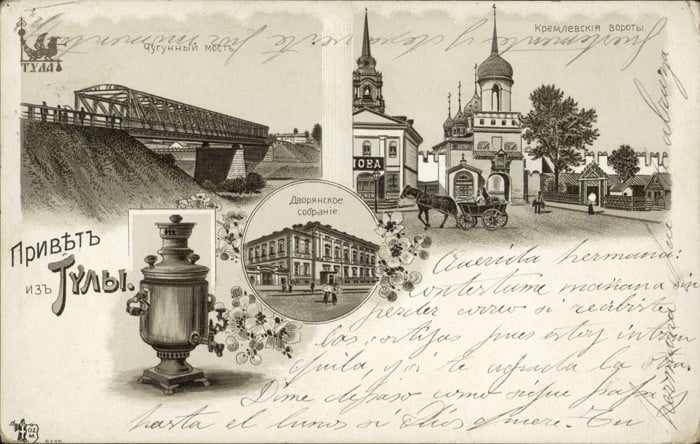 In the later XIX century Tula became a samovar capital of the Russian Empire with 77 samovar making plants running as of 1879. Not all of them could be called plants per se as the concept of a plant is a somewhat industrial production employing various machines usage while various samovar works were mostly hand-made. Major manufactures of that like Batashev Brothers’ or Nikolay Vorontcov’s Works were the first to adapt manual (or horse-driven) actuation later upgraded to steam drives, and oil or kerosene and electric motors by the early XX century . For instance, Vladimir Shemarin’s plant was equipped with two oil motors, 50- and 16- HP ones, not to mention four electric motors with total of 36 HP. The machine park included lathes (73), spinning lathes (4), rollers (3), drills (4), polishing machines (10) and 8 hand presses. Besides the permanent employees (495 people), two thousand of handicraftsmen making single parts of samovar at home were engaged. 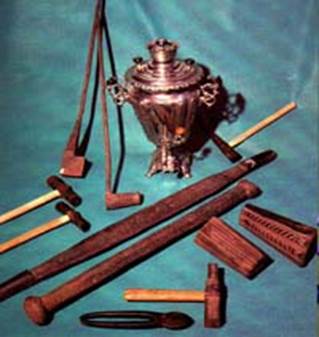 The foundation stone of samovar making was samovar body sides using the so-called adjustment when shape was forged manually . The tools used for the process included same ones as back at the origins of blacksmith craft development: anvil, hammer, tongs and forge-fire. Samovar makers called anvil a mare: it looked like a metal bar with custom tip shape to fasten the samovar side slab on.

Patterning process could be performed both at a plant and by handicraftsmen working on wallsides and inner fire tubes of brass sheets. The process started with the craftsman receiving the rectangular brass list, the so-called card to be then rolled into either a cylinder or a loose cone to end up with soldered joint .The card got pre-annealed in open furnace to soften and improve pliability. The annealing took sure-handiness, otherwise brass would get hard and fragile instead of softening. Brazed card was put onto cast-iron mould making the brass repeated the shape and pattern of hammered wallside or its part. This is where the unique easy-forging feature of brass in cold state manifested best .Different shapes of hammers were used to anneal while strokes and force balance remained skilled. Each pattern-maker had a special area of expertise: some only forged smooth wallsides or jugs, some would do wallsides of simple patterns and only the few would forge wallsides with the most sophisticated patterns. 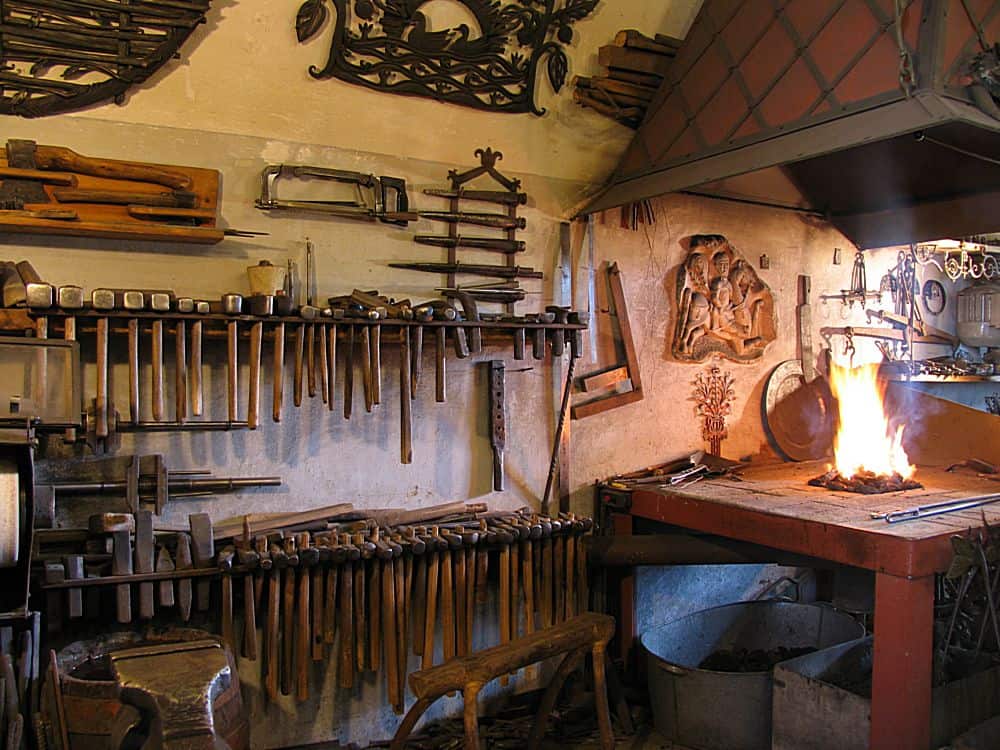 Fire tubes or jugs as they were called by the craftsmen were made of two parts: the upper narrow gorge and the lower wide bottom connected with the bearing rib gradually passaging from one to another. The Jugs were also made by pattern-makers gorge separate from the bottom, as tubes- with thoroughly soldered longitudinal joint. Bottom of the gorge got forged to expand to the bottom diameter to be then connected and soldered. Finished jugs got checked by specialty inspectors filling them corked with hot water in. With no seepage, the jug would have been sent on down the process line, otherwise it would have been returned to the maker for readjustment. 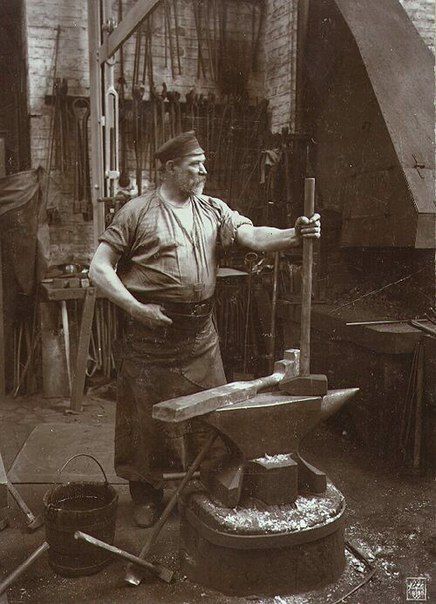 Samovar lids were also made of heavy-weight brass sheets i.e. the ones thick enough to be processed. The making involved mostly pressing lathes with the core of motor-driven shafts with cast-iron mould fixed to the free-end to match the lid in dimensions and surface pattern. Size-defined brass rings for the future lid were cut out with the special ‘scissors’ providing accurate and fast cutting. If the brass was too thick, the pressing lathe operator would soften it by burn-off before getting down to the next process phase. Then the craftsman would put the brass

ring on the free end and press it down to the mould with the nut. Then the spinning lathe was set to go with its operator pressing the special pressure stem down the fast spinning ring in order to give it mould shape. Single lid took under a minute – minute and a half tops to complete. Crowns and caps were made the same way: pressing on the same ring and cutting to separate afterwards. These parts were however mainly made solid-forged like the rest of the samovars pieces: neck, handles, faucets, escutcheon plates, bases, fire grates etc. 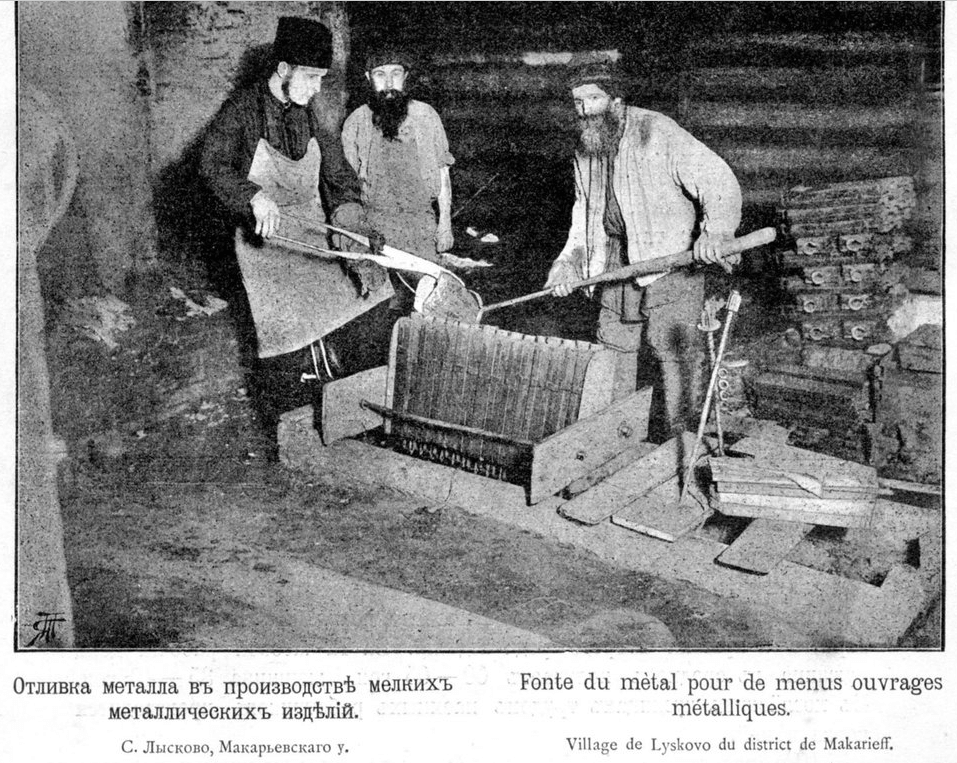 Solid raws were ordered at both different copper corks and so-called city castsmen. The latter were handed a brass crowbar to work by contracts to make small samovar appendices such as knob bolts, nails, prickers etc. to be re-sold to the works.

Futher steps of samovar making took place at fitting and turning machine shops. To be continued…