You are here:
ARCHIVE SECRETSNEWS 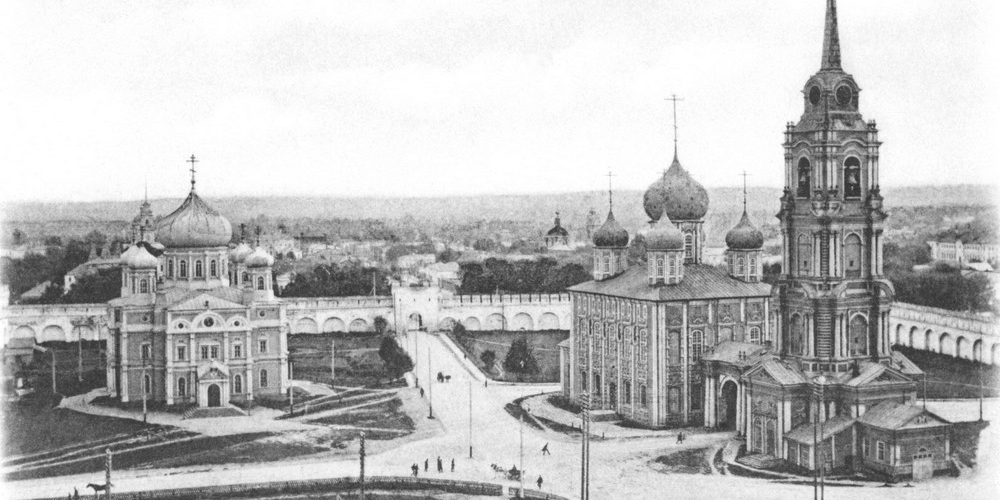 On 19th of January all orthodox christians celebrate the Epiphany Day. On that day church reflects on the baptism of Jesus Christ by John the Baptist in the river of Jordan, the day he has revealed himself as the Messiah. One of Tula cathedrals is dedicated to this particular celebration.
In 1817, after the visit of the Emperor Alexander I, local community decided to build a cathedral in the name of Alexander Nevsky, the name-sake of Alexander I, who liberated Russia and Europe from Napoleon. In 1821 Vasily Stasov, the architect, presented the design of future cathedral approved by the Emperor. A classic cathedral with column portico and apse surrounded by Doric colonnade capped by low-pitched dome.
In May 1821 the drawings arrived in Tula but with no decisive authority and public support the project was suspended: successors of the city governor and the head of eparchy appeared to be indifferent to the new cathedral construction, and, on top of that, the money raised for construction had somehow disappeared.
Discussions around the project have resumed only by the end of 1840’s. Since the Assumption Cathedral, the main in Tula, could only be used during the warm season, the city needed a warm cathedral.
Pavel Dubrovsky, the Governorate’s public architect, was invited to develop the rebuilding design for the old Assumption cathedral, however after a thorough study on the matter he realized that rebuilding could damage murals and icons and a new building must be built.
In 1849 Vukol Kuzovlev, a merchant and a churchwarden of the Assumption cathedral, has again raised a question of warm cathedral and suggested building it within the walls of Tula Kremlin.
The idea has also been supported by the mayor of Tula. Mr. Kuzovlev got publicly appointed to be the temple builder and due to his honesty and administrative abilities he has been entrusted with fundraising for construction. 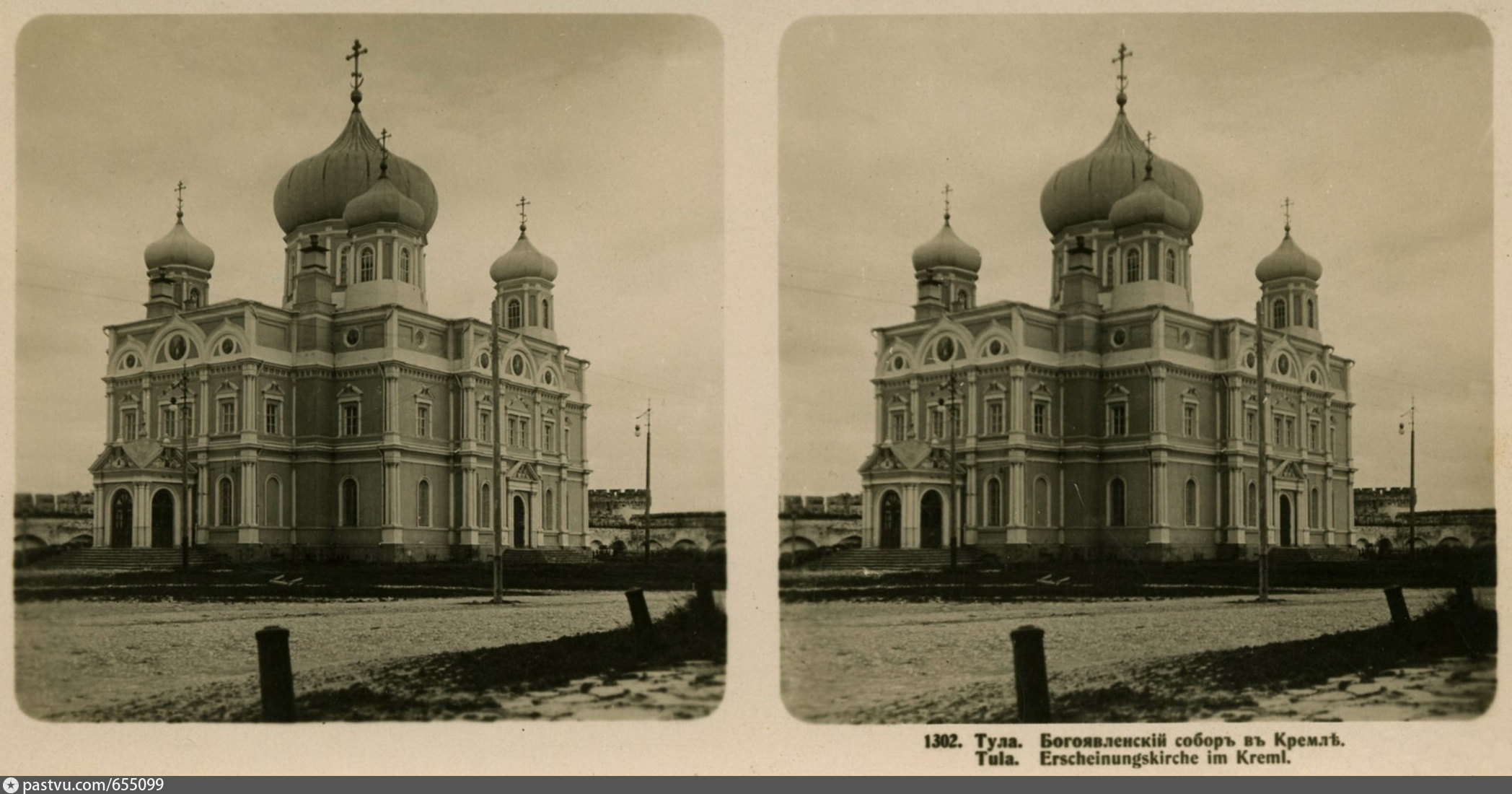 The warm cathedral has been designed by Mikhail Mikhailov (1805-1865), the architect of the Tula Weapon Works and collegiate assessor. According to his drawings, the future cathedral was to have rectangle shape and be 35×53 meters in size. Eight columns divided the interior space into three naves with the five domes capping the building. The High Altar was dedicated to the Epiphany and, parecclesions – to Alexander Nevsky and Nicolas the Wonderworker. The design has been approved by the governmental construction committee and sent to Saint-Petersburg for further approval. However the central authority appeared not to be fond of the provincial architect’s design because of the “inappropriate façade.”
After years of multiple redesigns and reapprovals, corrections and estimate cuts, the project has been revised so that the building got shortened and had its shape changed from rectangle into square with prominent breaks across the building.
On January, 1854 members of the Department of projects approved the design, followed by the approval from the Emperor Nicholas I on October 14th, 1854. Theological consistory of Tula received the design on January 28, 1855.
The winter Epiphany Tula Cathedral foundation work took off on April 24, 1855, the day of consecration of Tula mobile militia banners preparing to be sent to the Crimea War. Mr. Mikhailov, the architect, was responsible for the execution of works, while Mr. Kuzovlev was in charge of housekeeping and the mayor headed the Committee for construction.
By summer 1857 the building had the walls and two storeys erected. One year later all masonry and roof works were completed. However later works had to be suspended due to shortage in funding.
Therefore noble citizens and bishop of Tula and Belevy Aleksiy initiated a discussion on what should be done in the first place. The bishop suggested to gold-plate one of the five domes of the cathedral, while merchants thought it was important to complete the works to allow canonize the cathedral as soon as possible. Aleksiy then declared he was willing to pay for the gold plating work himself. Moscow merchant Safronov did the job, but the quality turned out to be so poor that very soon all of it vanished right in the middle and ruined the view.
In 1860 Semen Borisov, the iconographer from Moscow, painted the interior of the cathedral dome. The same year three stone porches on three sides of the building were built with the western porch having walls and iron roofing.
Final decoration of the cathedral had been under way from 1861 to 1862: they completed the mural, laid down the oak floor, put four kliros and put up the pine iconostasis by the master from Moscow Nikonor Safronov with icons by Semen Borisov. 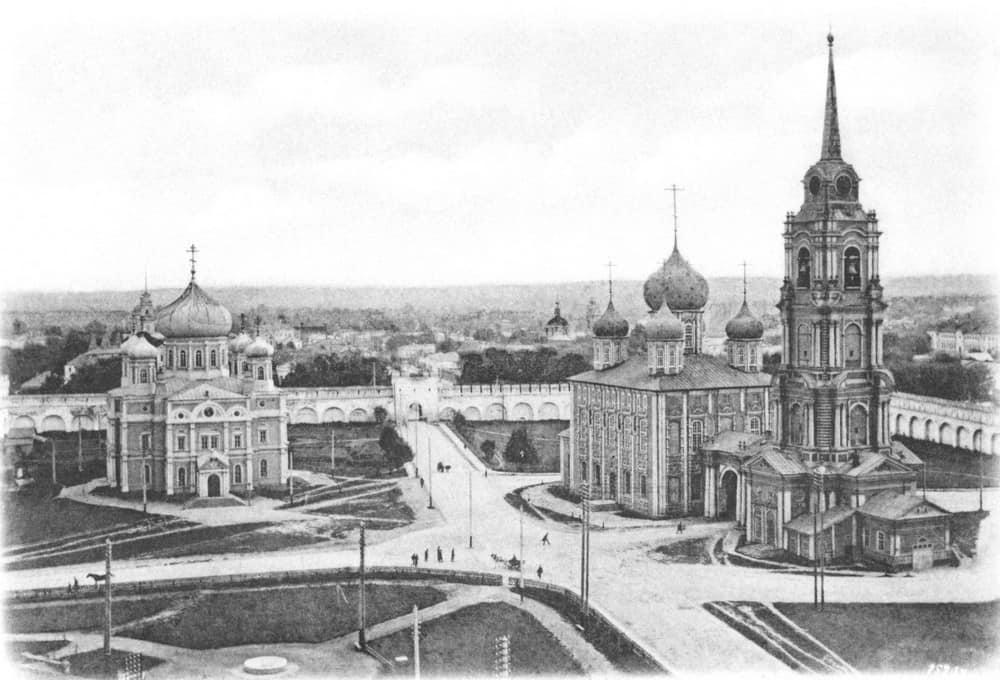 Tula Kremlin, Epiphany cathedral is on the left, beg. 20c.

Three heating stoves with vents heated the cathedral. The Epiphany Cathedral has been canonized on the 7th of November. It was 22.2 m long and about 15 m tall and had 51 icons (27 bigger and 24 smaller ones) and three iconostasis.
Total cost of construction and decoration made up 103 thousand rubles. Many merchants, nobles, weapon-makers and bishops of Tula and Belev bishops donated into its construction. The biggest donations were made by Semen Krasnoglaziy (Red-eyed), the merchant (eight thousand rubles), and Maksim Lyalin, the weapon-maker (five thousand rubles). Nikolay Dobrynin, the mayor, donated a lot of home ware to the new cathedral. Kuzovlev V.Z., the churchwarden, contributed a lot into construction of the Epiphany cathedral and was rewarded with the order of Saint Anna.
In 1892 the new hot-water heating, to major pride of Tula people has been introduced for the cathedral setting the bar high not only for Tula cathedrals but for Moscow ones as well.
The cathedral went through hard times during the Soviet era. In 1930’s it has been closed. The building was adapted to aero club and later in 1950’s – to physical education club. Four small domes of the cathedral got pulled down and the shape of the main dome was simplified. After the shutdown its walls have been repainted many times with different colors. A small summit with the cross below western parvis didn’t make it until today as well. 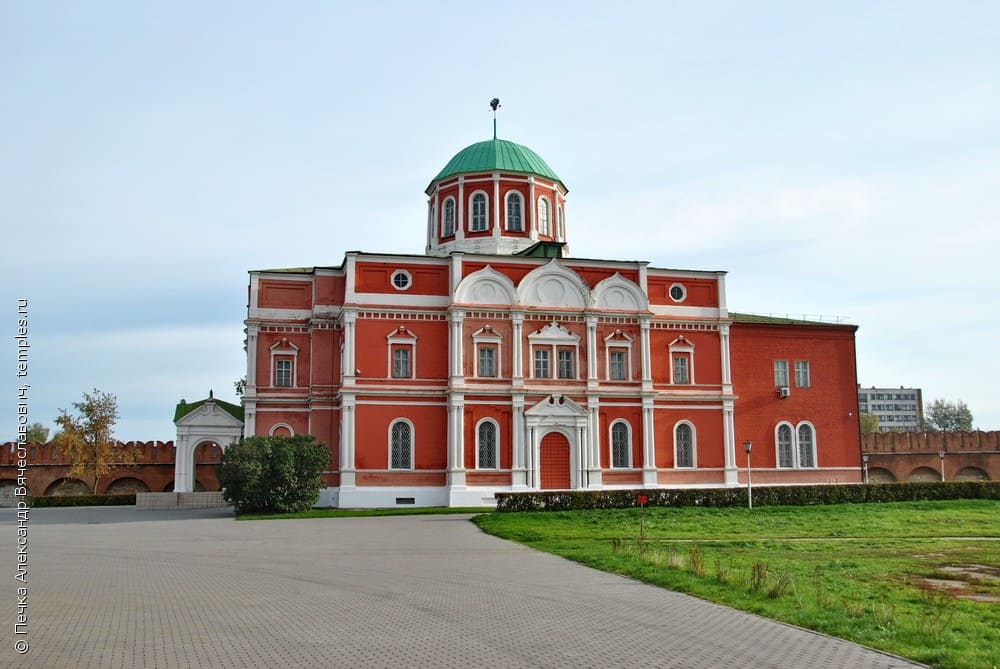 In 1960s it was decided to allocate the Weapon Museum in the Epiphany Cathedral. The cathedral has been sent over to the Tula Weapon Works. During the fifteen years since 1972 the building had been going through adaptation to the needs of the Museum. The former basement has been transformed into the wardrobe, premises and WC. The main museum entrance was set up on the eastern side by breaking through the altar wall. A two-storey extension with entrance hall, stairs and premises was built on the same eastern side.
Unfortunately, the original look of the building with murals, choirs, moldings has never been researched or respected.
The organization responsible for the Museum exposition also painted the walls of the former cathedral, while the outdoor walls have been painted with dark synthetic dye, and the remains of white stone steps at the southern and northern entrance have been demolished.
Nowadays the edifice hosts one of the Museum expositions: after moving into the new building in Oktyabr’skaya street, one of the museum exhibition halls is located here.
Regrettably, not a single cathedral dedicated to the main orthodox celebrations remained in Tula.